Fintech stands for "financial technology" which refers to the technology employed while catering to financial services offered by companies. Talking about Fintech, the future of technology in financial services is part of a worldwide innovation boom and it is growing as the fastest industry in Australia. This makes Australia an economic center and a great location for companies wanting to establish their regional headquarters. The country has shown its eagerness to discover opportunities to expand into global markets, via formation of partnerships with overseas FinTech companies. Australia is punching well beyond its weight in the international arena of FinTech.

Award for Fintech Innovation: Wisr Limited (ASX: WZR) is one of the most recognized Fintech companies in Australia, which offers lending platform and provides personal loans and retail investment products. The company has recently announced that it has extended the contract with Anthony Nantes, CEO for a span of 3 years. In the recent presentation, the company announced that Year on year loan origination has grown to $68.9 million in FY19 from $18.1 million in FY18. The company has also won an award for Fintech Innovation in Lending at the 2019 Fintech Australia Awards.

The company has also launched Wisr App for Android. Users have made over 35,000 Wisr App downloads and the company is on path to have repaid $1 million of debt by early 2020.

$150 million Lending Milestone: Wisr has recently attained a milestone of $150 million in annual lending origination. The operational brilliance and accessibility of technology have led the company to improve upon the efficiency of its team while providing a growth of 105% in daily settlements for 2Q FY 20 till date.

Appointment of CFO: Computershare Limited (ASX: CPU) is a computer bureau which is engaged in operation of share registries and the provision of software. This company specializes in share registry, financial and stock markets. As on 10 January 2020, the market capitalization of the company stood at $9.43 billion. The company has recently announced an appointment of Mr Nick Oldfield as the new CFO with effect from 3 December 2019.

What to Expect from CPU Going Forward: The company has developed a new five-year plan for mortgage services and has achieved its margin targets of 20% profit before tax towards the end of the year. The company expects the Management EPS to be down around 5% on FY19 but is leveraging its relationships with its customers to drive growth.

Increasing Group Revenue: HUB24 Limited (ASX: HUB) provides investment and superannuation portfolio administration services, the provision of licensee services to financial advisers and software license and IT consulting services. As on 10 January 2020, the market capitalization of the company stood at $703.32 million. HUB24 continued to benefit as a result of growing FUA (Funds Under Administration) by 54% to $12.9 billion in FY 19 and increasing group revenue by 15% to $96 million.

CAGR of 76% in Platform Revenue: During FY19, the company managed to maintain its position as the fastest growing platform provider in Australia with a compound annual growth rate (CAGR) in Platform revenue over the past five years of 76%. The company is in good position to benefit from the future prospects and this has been demonstrated by the record growth in the first quarter of FY20, with net inflows of FUA of $1.2 billion, representing an increase of 94% on the prior corresponding quarter, almost double the level of the first quarter of FY19.

Future Opportunities: The company continues to innovate, launching foreign currency capabilities and providing additional flexibility for licensees and investment managers. This will allow them to work with a range of third-party Responsible Entities to deliver Managed Investment Scheme (MIS) portfolios to their clients via the platform. The company is also continuing to build ConnectHUB and plans to launch it in FY20

Strong Cash Position: Money3 Corporation Limited (ASX: MNY) provides finance, specializing in the delivery of secured automotive loans as well as secured and unsecured personal loans. As on 10 January 2020, the market capitalization of the company stood at $444.19 million. In the recently held Annual General Meeting, the top management of the company addressed its shareholders and stated that the company has a strong cash position as cash reserves increased by $45 million along with large funding headroom. The company has also launched new products and have acquired Go Car Finance in New Zealand.

The improving performance of the company enabled the board to pay the fully franked dividend of 10 cents per share. During the year ended 30 June 2019, the normalized Net profit after tax of the company stood at $35 million 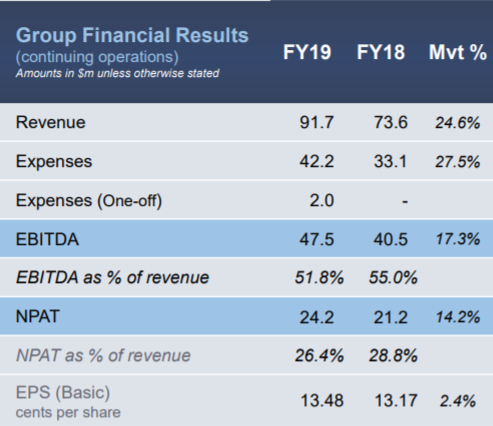 Growth Opportunities: The company is focusing on sales and marketing initiatives and is expanding its addressable market. It is also investing in smart and innovative technology to improve growth, scale and customer experience. Money3 Corporation has launched new products and have received 35% Australian loan application growth in Q1 FY 20 compared to prior corresponding period. It is also aspiring to achieve NPAT in excess of $30 million in FY 20 with dividend of 10 cents per share.

New Junior Funding Partner: Prospa Group Limited (ASX: PGL) is engaged in online lending to small businesses. As on 10 January 2020, the market capitalization of the company stood at $322.7 million. The company has recently introduced a new Junior Funding Partner into one of its Australian Warehouse Facilities which will fund small business loans and line of credit facilities. It will have an initial capacity of A$20 million. In the financial year 2019, revenue of the company went up by 31.2% to $136.4 million.