Crude oil prices rose in the international market amid attack on the oil tanker of Saudi Arabia off the coast of the United Arab Emirates.

The attack on oil tankers during the time of escalating trade tension between the United States and Iran supported the crude oil prices, and the benchmark Brent Oil Spot surged from the level of US$69.75 (Day’s low on 9th May 2019) to the level of US$72.88 (Day’s high on 13th May 2019).

The United Arab Emirates mentioned that four commercial vessels containing oil were sabotaged near Fujairah emirate, and in their statement, the oil Kingpin condemned the attack as an attempt to undermine the security of crude supplies at the time of supply constraint in the global market.

On the supply side, the recent drop in the inventory of crude oil in the United States, which supported the prices previously,  and the stance of OPEC members to move with the production cut as per the previous decision of the cartel is creating a supply gap again in the global market.

The escalation in the war of words between the United States and Iran coupled with the recent destruction of oil tankers at Fujairah emirate, which is one of the world’s largest bunkering hubs, created a concern of supply shortage in the global market and boosted the crude oil prices.

Apart from the war of words between Iran and the United States, the recent military presence of both the countries in the region of Iran is further generating fearmongering among energy investors and speculators of a possible supply disruption, which in turn, is supporting the crude oil prices.

As per the official sources, one of the two tankers attacked was going to the United States for the consumption of Aramco’s customers in the U.S. from the port of Ras Tanura.

China has recently retaliated and decided to hike tariff on US$60 billion of U.S goods from 1st June 2019. Investors may further keep a close watch on the global economic scenario. 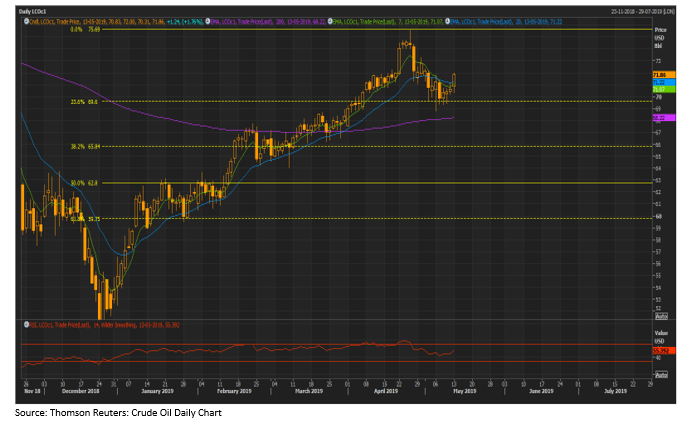 Crude oil on a Daily Chart:  On following the development on a daily Chart, it can be seen that the crude oil prices are moving in a long-term uptrend amid the voluntary production cut from the oil-producing cartel. However, in a recent event, the prices retracted around 23.6% of the initial upside rally since the ending of April 2019.

Technically, the crude prices are currently trading above its short-term 7-day exponential moving average (EMA), which is placed at US$71.07, and medium-term 20-day EMA, which is at US$71.22. The medium-term EMA is still above the short-term EMA, which signifies that the prices need a strong bull run to continue its original uptrend. The long-term 200-day EMA is at US$68.22, the value below both the 7 and 20-day EMA suggests that the original trend is an uptrend.

If a bull run is seen in a near-term, the short term could move above the medium term EMA, which will establish the original trend of crude oil price.