In the below article, reader will get a brief of demerger, forms of demerger, its benefits to the investors. The reader will also get to know about the reason why companies go for such transactions.

Now, let’s get to know about the forms in which a company can carry out the demerger, which include Spin-off and Split-off.

What are the reasons for a company to opt for demerger?

In general following can be the reasons for demergers:

Value and growth generally depend on the expectation of market participants from the demerger and whether these are in sync with the management’s vision. Some of the companies manage to create value for shareholders and some do not. Let’s understand this by an example:

Demerger of Coles Group and Wesfarmers:

On the context of demerger, one of well-known Australian Supermarket players, Woolworths Group Limited (ASX: WOW) has previously announced a demerger of its drinks and hospitality business, Endeavour Drinks and ALH Group, into a single entity known as Endeavour Group Limited. On that, the company believes that the demerger will be creating value for its shareholders. Let dig deeper into the same:

A Look at Endeavour Group after the combination

An Introduction to the Transaction Steps:

After the demerger, Endeavour Group would be able to realise its full potential by further developing its retail drinks and hospitality networks. It will also capitalize on its store network and digital capabilities to augment online penetration. It would also continue to enrich and differentiate its drinks product portfolio. 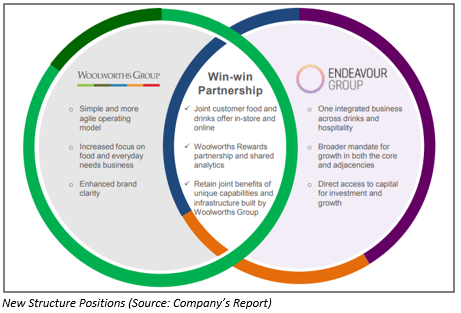