Among Australia’s highly successful leisure & entertainment groups, Ardent Leisure Group has a presence in the United States of America as well. The group now consists of two distinct business divisions supported by the simplified corporate structure.

In November 2018, the group appointed Mr John Osborne to lead the Theme Parks division as the new CEO. He is supported by a team that holds deep experience in safety, engineering and operations.

In October 2016, the division witnessed a tragic incident, and the Board is committed to implementing recommendations by Coronial Inquest in consultation with the theme park industry and Workplace Health & Safety Queensland.

In the year ended 25 June 2019, the group made progress on improving ride availability and special events. Several initiatives were undertaken in this regard, including Park after Dark, ABC Kids Month, and Sky Voyager.

Dreamworld has announced an attractive pipeline of new rides and attractions, including a new 1.2km rollercoaster. At WhiteWater World, a new waterslide complex was rolled out. The new complex incorporated 6 body slides.

Main Event division is expanding with three new centres due to open in FY 20, taking the total number of Main Event centres to 46 across 18 states. The division operates in the US with strong expertise in opening and operating multisite businesses, and an aim to open five to eight centres each year.

In FY 20, the management intends to focus on brand identity in the existing markets, improving guest experience, new technologies, entertainment offering and on-trend food & beverages. These efforts are targeted to drive growth in walk-in, birthday parties, and corporate business.

In FY 2019, the financial performance was beleaguered with several non-cash impairments of certain previously impaired US centres, provision for an onerous lease and cost associated with the restructuring of the group.

Chairman’s letter in the 2019 Annual Report states that promising signs have started to emerge in FY 20. The initiatives undertaken by the group are likely to have favourable impacts on the business conditions, and the group is committed to returning to profitability.

Year-on-year change in the net loss was approximately $30 million. The group successfully capped its losses at $60.9 million compared to $90.7 million in the previous year, and this was achieved, despite a contraction in total revenue by $64.2 million.

The financial performance was impacted by impairment charges at several US entertainment centres in the current and previous years, incident costs associated with Coronial Inquest, and trading conditions were not normal post-incident at the Theme Parks business.

Some of the adversely impacting charges included a $17.6 million non-cash impairment of property, plant and equipment in certain previously impaired under performing Main Event centres. A $3.7 million increase in the restructuring and other nonrecurring items. 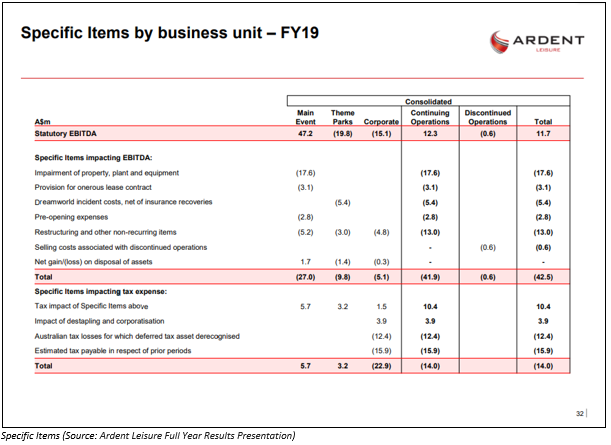 Chairman of the group – Dr Gary H. Weiss AM stated that the group does not expect most of the specific items to continue impacting the financial performance of the group. The group has made progress on the continued reduction of recurring items.

Like we mentioned earlier, the Australian business or Theme Parks, which has announced developments related to new pipeline and attraction, enhanced ride availability and special events, is likely to provide the potential for growth.

In FY 2019, Theme Parks only had a share of ~14% of the segment revenue from continuing operations, implying massive potential to grow the revenue from Australian business. Further, the initiatives taken by the group are likely to bring a positive impact on customer engagement.

Despite a decrease in the attendance of 11.2% over the previous year, the per capita spending increased to $45.99 compared to $40.67 in the previous year. Among the major headwinds, the hearings related to Coronial Inquest impacted the business, and there was a delay in the opening of Sky Voyager.

In addition, the Dreamworld site (part of Theme Parks) only occupies land just over 50% of the total land owned. The company was involved in a process to determine the best possible use of the land to unlock additional value, including tourist adjacencies, commercial and residential uses.

In December 2018, the stapled securities of the group were successfully converted into shares in a new listed entity – Ardent Leisure Group Limited, allowing the group to have greater flexibility to fund investment growth, reduced regulatory uncertainty & administrative costs associated with stapled securities, and a simplified financial reporting.

In April 2019, the group had announced the completion of a USD 225 million debt facility obtained and guaranteed by Main Event. It was said that the funding would allow the group to make investments in Theme Parks to overturn the losses with profitability. The funding would also support the development of new Main Event centres in the US. Besides, the company’s existing Australian bank debt facilities were fully repaid.

In FY 2019, the Board of the company was complemented with the addition of Antonia Korsanos as a Non-Executive Director. However, Roger Davis and Don Morris AO, two long-standing Directors, retired from the Board.

In the outlook for Main Event, the group expects constant centre revenue increase of 1-2%, and four new centres in FY20 to add approximately 60 additional operating weeks. Starting from FY 21, the group has an ambitious plan to inaugurate five to eight new centres each year. In the medium term, the group has a target of 20% in EBITDA margins, excluding specific items.

For Theme Parks, the group expects Sky Voyager to increase attendance, which was opened on 23 August 2019. The group has plans to invest ~$50 million in new rides, attractions and systems along with significant investments in FY20.

It was said that the status quo remains to optimise the expense levels, while the expected investment in new rides and improvements undertaken in the latter half of FY 2019 would allow Dreamland to recover.