The stocks of Intel Corporation (NASDAQ: INTC) and Snap Inc (NYSE: SNAP) have gained attention from the investors, following their quarterly earnings release on October 21, after the bell. The former was down around 10% in pre-market trading on October 21, while the latter plummeted more than 20%.

Here we explore the earnings details and stock performances of the two companies.

Intel is a technology company based in Santa Clara, California. It is one of the leading semiconductor chip manufacturers in the world, that develops various microprocessors for computers.

Meanwhile, the company has topped the EPS estimate of the Wall Street analysts but missed revenue forecast. The analysts had expected the company's adjusted revenue to be US$18.24 billion and its diluted EPS to be US$1.11 apiece, Refinitiv data showed.

However, for fiscal 2022, the company expects its revenue to be about US$74 billion, up from the analysts' forecast of US$73 billion.

Intel CEO Pat Gelsinger said that he expects the shortage of chips to extend till 2023, and it may also hamper the profit of the company. 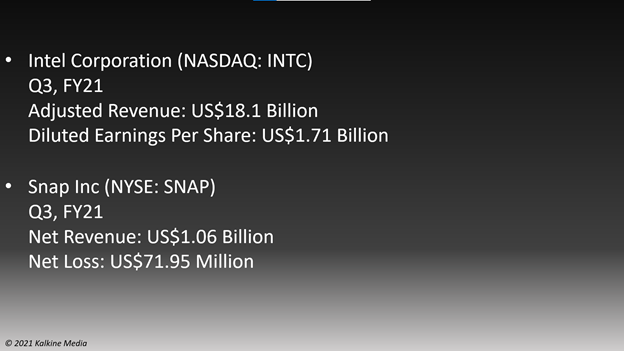 Snap Inc is a camera and social media company based in Santa Monica, California. It provides a camera application for its users to communicate through images and videos.

The company now expects its revenue to be between US$1.16 billion and US$1.20 billion in the fourth quarter of fiscal 2021.

Meanwhile, the company said that the decrease in the advertisement is one of the main concerns of the company in the coming quarters. The majority of its revenue comes from the advertisements on its app, which is hampered due to the bottleneck supply constraints globally and the labor shortages. In addition, Apple's new policy that prevented the advertisers from tracking iPhone users without their consent has also raised concerns of Snap, the company added.

Both the stocks have witnessed significant growth in recent quarters, mainly due to innovations in their respective businesses. Experts have also provided bullish remarks for the companies due to the increasing demand in the technology and communication sector. However, an investor should closely evaluate the stocks and the recent volatility of the market before investing.