Union Jack Oil plc (LSE:UJO) is one of the major oils & gas producers based in the United Kingdom. It is into drilling, development, production and investment in the hydrocarbon sector. The stock of the company is listed on the AIM Market of the London Stock Exchange.

The company firmly believes in the appraisal and exploitation of the assets it currently owns. In addition, the UJO’s management hopes to continue using its expertise in getting new licence interests in the areas where there is the lesser time required to procure the interest and explore drilling-related activities or initializing production from any oil or gas fields that may be discovered.

The company has made an announcement that Frazer Lang, who was serving as Non-Executive Director, has resigned from his position in the company, which will take place with immediate effect.

The company made an announcement in mid-April, they had conditionally agreed to sell their 7.5% license interest in Holmwood to UKOG (UK Oil & Gas PLC). The sale deed was to be executed by sale and purchase agreement with the principal terms agreed upon, subsequently followed by approval obtained from the Oil and Gas Authority. The company confirmed on 3rd June 2019 the completion of the sale of (7.5 per cent) interest in Holmwood to UKOG.

Post this transaction of £112,500; Union Jack would be able to reap benefits from UKOG’s increased interest in “Holmwood” and exposure to UKOG’s Weald Basin assets and other projects. This sale of interest will allow Union Jack to focus on East Midlands, Humber Basin and East Yorkshire areas. 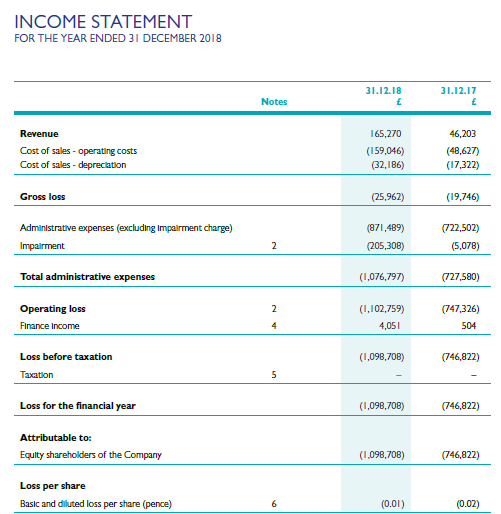 The Company’s financial statement reports revenue of £165,270 in FY2018 against £46,203 in FY2017. This can be attributed to production income from the Keddington oilfield and the Fiskerton Airfield oilfield. The company’s cash balances are of £2.5 million as on 1 May 2019. As of now, all drilling and testing projects are fully funded by the company. The revenue from production increased by more than 250 per cent. The company remains debt free. The company further expanded the portfolio by specific accretive transactions in Wressle and Biscathorpe. The company possesses an increased level of reserves.

Daily Chart as at June-11-19, before the market closed (Source: Thomson Reuters)

Canadian Overseas Petroleum Limited (COPL) is an oil and gas producer with a proven track record for discovering oil and gas quickly and efficiently. The Company formed a joint venture with Shoreline Energy International Ltd; in line with the Company’s focus to diversify and find the right asset portfolio balance to generate stable cash flow from secure assets. Both companies hold a 50% interest in the jointly controlled company.

The company will be issuing new ordinary shares in two tranches. The company will issue new 429,200,000 shares which will bring proceeds of £429,200. The second trance will include shares amounting £67,800 and will be admitted for official listing.

In 2017, the Company derecognized its exploration and evaluation assets of $15.6 million; there was no such derecognition recorded in the comparable period of 2018. During the year ended December 31, 2018, the Company recorded a gain on derecognition of a former, 2011/2012 joint venture payable in the amount of $0.7 million; there was no such gain recorded in 2017. Stock-based compensation expense of $0.3 million was recorded in 2017 in relation to stock options granted; there were no stock options granted in 2018. A foreign exchange loss of $0.2 million was recognized for the year ended December 31, 2018 versus foreign exchange gain of $0.4 million in 2017.

Consequently, the Company’s net loss was recorded at $4.9 million for the financial year ending December 2018 as against a net loss of $20.1 million in the Financial year 2017.

Daily Chart as at June-11-19, before the market close (Source: Thomson Reuters)