ECR Minerals is a mineral explorer and developer focused on gold projects in Australia, and especially the state of Victoria. The company’s principal activities involve the identification, acquisition, exploration and development of mineral projects. The projects in which the company holds interests include the Bailieston Gold Project, Creswick Gold Project, SLM Gold Project and Danglay Gold Project.

The Bailieston Gold Project is at the focal point of the current gold exploration surge in Victoria as it is placed close to Kirkland Lake Gold owned highly successful Fosterville mine.

ECR Minerals has identified a number of high priority gold prospects within the Bailieston Gold Project, some of which have the potential for immediate drilling. 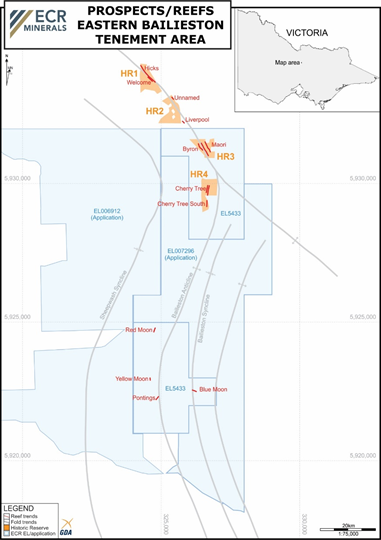 Encompasses the Byron, Maori, Scoulars, Dan Genders, Hard Up and Scanlon’s reefs, and forms the largest area of historical workings (700 metres by 300 metres) within the Bailieston project area.  MGA’s exploration objective at HR3 is to explore the prospect of integrating the different reefs at depth to reach at an important modern-day resource.

There is a gap in the historical workings from the HR3 area for roughly 800 metres to Cherry Tree to the south and for around 400 metres to the dwelling boundary to the north, and there is potential in these zones for unexplored mineralisation, especially at depth.

Three dimensional (3D) modelling of historical data for the Bailieston Historic Reserve #3 (HR3) and the results of drilling in the area by MGA in 2017 was completed in late 2019 and has assisted in the identification of the architecture of the major folds, structures and cross structures at the prospect. HR3 includes at least 4 closely spaced lines of reef, comprising the Byron, Maori, Dan Genders and Scoulars Reefs, combined with numerous cross-structures, providing various drill-ready targets. 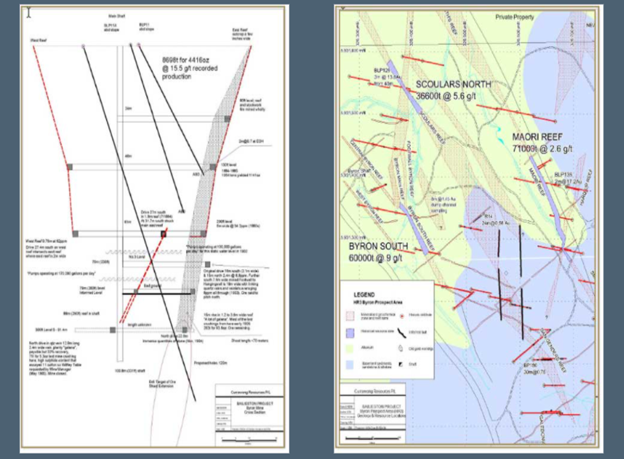 The Black Cat prospect is located immediately south of ground which has been applied for by a subsidiary of Newmont Mining, one of the world’s largest gold mining companies, and is among the high importance targets recognised by a geophysical interpretation and targeting study done for ECR in late 2017.

In Q1 2019, MGA completed a reconnaissance rotary air blast (RAB) drilling programme targeting various quartz reefs at Black Cat, with a total of 18 shallow holes for 485 metres being drilled. The prospect had never been drilled before. RAB drilling is a low-cost method perfectly fit for the first pass, exploration testing required at the Black Cat gold prospect. 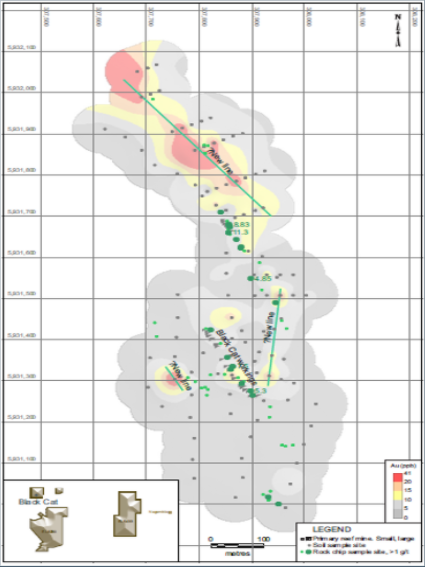 Blue Moon is an exciting new gold discovery made by ECR, with intercepts from 2019 reverse circulation (RC) drilling including 15 metres at 3.81 g/t gold from 51 metres downhole, with 2 metres at 17.87 g/t gold. The best 2019 drilling results came from the western fence line, with the host sandstone thinning towards the east.

ECR intends to assess whether the mineralisation continues to develop towards the west, considering gaining surface access. There is also possibility to carry out additional drilling within the zones previously assessed, with the objective of creating an initial JORC Mineral Resource.

Blue Moon was identified as a high priority prospect in early 2018 when Dr Rodney Boucher, an experienced Victorian gold geologist, commenced a review of all available data on ECR’s Victorian exploration licences (at that time numbering 4 licences), perfected by geological mapping and geochemical studies in designated areas.  The prospect was then tested by drilling, leading the company to declare Blue Moon an exciting new gold discovery based on the positive results.

In addition to Blue Moon, two further prospects with similar characteristics at surface, namely anomalous arsenic and broad areas of quartz float, have been identified within an approximately 3km radius. 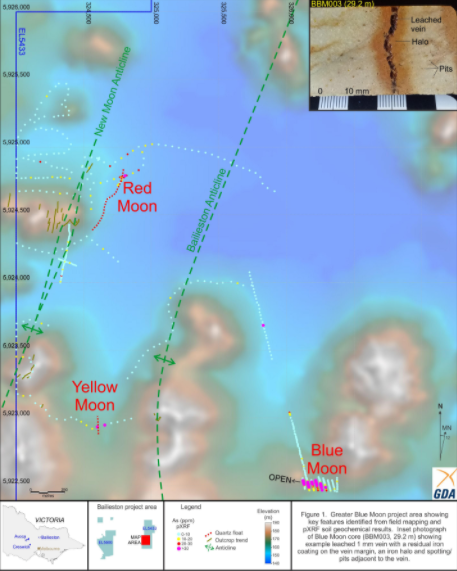 ECR is gearing up to launch next stage exploration campaigns across its properties in Victoria now that the Victorian winter has come to an end and COVID-19 restrictions within Australia are easing.

Significantly, the company’s Australian subsidiary has acquired a new Cortech CSD1300G diamond drilling rig, complete with spares and all downhole equipment, which is expected to be capable of drilling as deep as 1,300 metres.  ECR has access to experienced drilling personnel to operate the rig, and it is expected that future exploration drilling on its gold projects in Victoria can be completed at lower cost and with greater flexibility using its own rig.

ECR management see the outlook for the company as positive and are looking forward to reporting drilling results from the Bailieston Gold Project as the new rig is put to work.