HSBC Holdings PLC is a UK based financial service group that operates in 64 countries. The Group categorizes the business under Wealth & Personal Banking, Commercial Banking and Global Banking & Markets. HSBC Holdings is included in the FTSE 100 index.

HSBC Holdings reported revenue of USD 26.7 billion in H1 FY20 that was USD 29.4 billion in the same period a year ago. The net interest income was USD 14.5 billion, whereas net fee income and net income from financial instruments held for trading were USD 5.9 billion and USD 5.7 billion, respectively. The profit before tax was USD 4.3 billion, which was down by 65.2 percent year on year. The profit after tax was USD 3.1 billion and the earnings per share were USD 0.10 in H1 FY20. The return on equity on an annualized basis declined to 2.4 percent in H1 FY20 from 10.4 percent in H1 FY19. The total expected credit losses and other credit impairment charges were USD 6.8 billion in H1 FY20 that widened significantly from USD 1.1 billion a year ago. The business performance in the H1 FY20 was dragged down by the pandemic and volatility in the market. The impairment charges increased during the reported period following charged related to some wholesale customers. 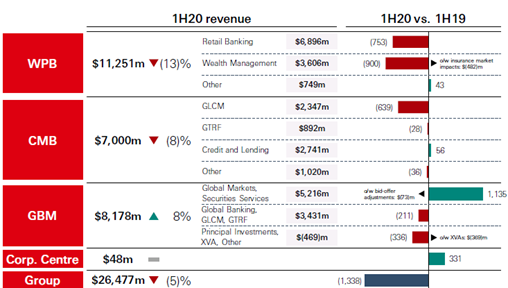 1-Year Chart as on August-17-2020, before the market close (Source: Refinitiv, Thomson Reuters)

HSBC Holdings highlighted that the current volatile market conditions would weigh down on the performance in H2 FY20 and FY21 and any development of the coronavirus vaccine could bring a turnaround. The Group has stated that it could incur economic credit losses in the range of USD 8 billion to USD 13 billion for FY20. The lower interest rates and subdued customer activity has put pressure on the revenue. The Group expects the risk-weighted asset (RWA) to grow by mid to high single-digit in FY20.

Barclays PLC is a UK based financial service group that has diversified business interest. The Group categorizes the business under Barclays UK and Barclays International. Barclays UK is a UK retail bank that offers services such as Personal Banking, Barclaycard Consumer UK and Business Banking. Barclays International is a diversified bank that provides services such as Corporate & Investment Bank and Consumer, Cards & Payments. Barclays is included in the FTSE 100.

Support provided during the Covid-19

1-Year Chart as on August-17-2020, before the market close (Source: Refinitiv, Thomson Reuters)

The Group highlighted that it expects the business performance of Barclays UK and CC&P to improve slightly from the Q2 FY20 level with some uptick expected in the income. The business activity in FY21 is expected to be weighed down by the low-interest rate scenario. The future performance of CIB is poised in tandem with the strong performance in H1 FY20. Barclays is mindful of the current economic scenario, and thus, it has acknowledged that impairment charges in H2 FY20 could be higher than that experienced in the recent past.