Reach Plc (LON: RCH) is the FTSE All-Share listed media stock. The Company is the UK’s largest commercial national and regional news publisher with a leading portfolio in Ireland. The Company had 5 million registered customers base across the UK and Ireland. Based on its 1-year performance, shares of RCH have generated a return of about 44.16%.

The Company is engaged in developing unique content which is distributed through newspapers, magazines and digital platforms. Reach is the largest commercial publisher in the UK having over nine national and over 110 regional newsbrands targeting 47.8 million people in a month. The Company had two broader segments for reporting its revenue – Print Segment and Digital Segment.

On 11 December 2020, the Company had appointed Dr Julie Humphreys as the Head of Diversity and Inclusion. 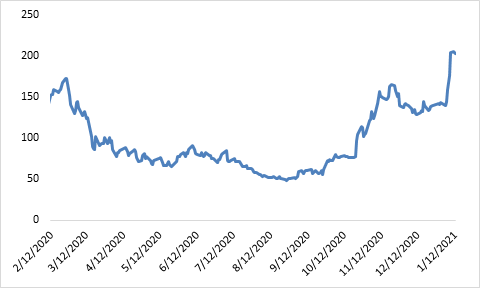 The Company would continue to work on its reputation as the UK's leading news publisher and would launch new sites covering Bedfordshire and Buckinghamshire during January 2021. The Company is on track to achieve 10 million registrations by the end of 2022. The Company expects trends towards digital growth, and resilient circulation will maintain its momentum in the near future.