Auto Trader Group Plc (AUTO) specialises in the digital automotive marketplace. The company provides products and services to retailers and home traders to support their online activities. It offers vehicle advertisement on its Websites for individuals; and display advertising on its Websites for advertising agencies and retailers, as well as insurance and loan financing products to consumers. The company has a headcount of 804 employees, including full-time and on a contract basis. 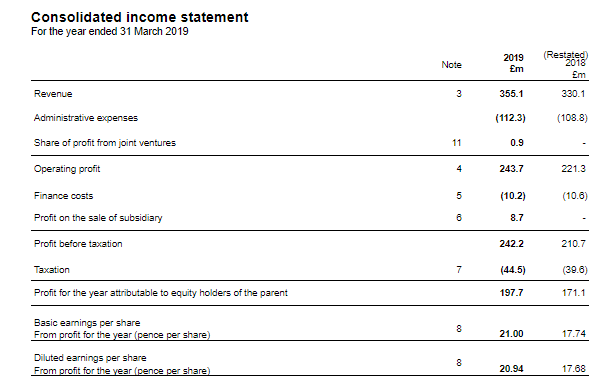 Profit before tax was up by 15 per cent to £242.2 million this year against £210.7 million in FY2018; which includes a profit of £8.7 million received on the consolidation of Smart Buying, a strategic partnership between the Cox Automotive and the company.

Cash flow from operations went up by 13 per cent to £258.5 million this year against £228.4 million in FY2018. This happened due to the steady Operating profit along with the low working capital requirements.  Customer receivables and collections strongly drove cash conversion. About £151.1 million was paid back to the shareholders through £93.5 million of share buybacks along with dividends of £57.6 million in FY2019.

Daily Chart as at June-07-19, before the market close (Source: Thomson Reuters)