The imposition of the EU’s Brexit border controls has delayed checks on food imports from the UK. Food and beverage exports to the EU have been registering a huge decline due to the imposition of Brexit trade barriers. Amidst the looming effects of new border regulations, sales of cheese and beef were impacted the hardest.

Food and Drink Federation (FDF) producers reported a sales loss of £2 billion in H1 2021, which could not be compensated for by the higher sales to Australia and China during the same period. The UK-based food and drinks companies and farmers were also confronted by a shortage of heavy goods vehicle drivers and warehouse workers, further adding to the supply chain issues. 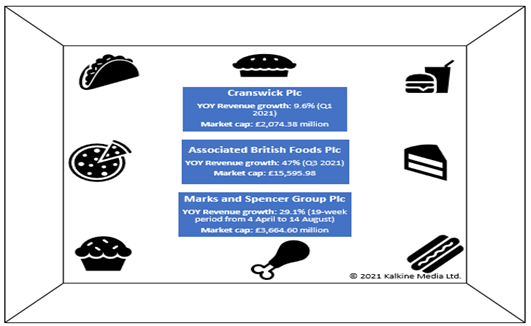 Here we are reviewing in detail 3 FTSE listed food stocks to explore the investment prospect in them.

FTSE 250 listed Cranswick is a UK-based company engaged in the production and supply of premium and added-value food products. The company shares last traded at GBX 3,878.00, down slightly by 0.97% at the close of trade on Monday 13 September 2021.

Cranswick recorded revenue growth of 9.6 per cent and volume sales growth of 7.7 per cent year-on-year for the Q1 ended 26 June 2021, driven by strong retail demand and higher sales from the Eye poultry facility.

Cranswick’s shares returned 9.02% in the last one year to shareholders, and its market cap stood at £2,074.38 million.

For the full year ended 18 September 2021, ABF expects net cash at £1.9 billion, compared to £1.6 billion at the end of the previous financial year.

Marks and Spencer is a leading UK-based retailer operating in the food, home and clothing segments. The company’s shares last traded at GBX 188.55, up by 0.75% at the close of trade on Monday 13 September 2021.

Marks and Spencer estimate adjusted profit before tax for 2021 to be about £350 million.

Marks and Spencer Group’s shares returned 85.13% in the last one year to shareholders, and the market cap stood at £3,664.60 million.