WideCells Group PLC (WDC) is a London, the United Kingdom-based group and provides an integrated stem cell support services internationally. It is a holding company that is mainly focused on offering insurance for stem cell treatment and stem cell banking services. The group functions through seeking an appropriate investments segment. The company is differentiated into three geographical segments being the United Kingdom, Portugal and Spain. The company’s business operations are divided into three division: WideCells, CellPlan and WideAcademy. These division are operating under a separate brand. The group provides its cord blood banks, services and products to patients, and hospitals. In 2012, WideCells Group PLC was formed.

The WideCells division is a collaboration with third-party blood banks, it offers cryopreservation, storage services, and stem cell collection to the public. This division operates in Spain and Portugal.

The CellPlan division is mainly focused on the provision and development of a specialist insurance product. This insurance product is for the stem cell and cord blood banking and services sector.

The WideAcademy division provides the training programs for healthcare professionals on the processing, collection, use of stem cells, and storage in medical events and stem cell and cord blood banking and services sector.

On 17th June 2019, the company announced the financing agreement. This agreement entered by the group and the Investor (the European High Growth Opportunities Securitization Fund), under which the group issued bonds convertible into ordinary shares of £0.0025 per share in the group to the Investor, has now expired. The company knows that substantially all the residual bonds have been converted.

The company is also pleased that resulting from any final conversions, the Investor has agreed to lock-in in respect of shares representing not less than 5 per cent of the issued share capital of the group post this conversion. The papers have been providing to the Investor, and it is projected that the lock-in is for a period of not less than the 4 months.

On 20th May 2019, the group announced the selection of MSP Corporate Services Limited as company Secretary.

In March 2019, the group has made a decent progress in making its building and offering out its existence within the latest media marketing space in the Iconic Labs. The company was conducting a plan of balancing short-term revenue by partnering with marketing and advertising agencies.

In spite of the significant efforts to reorganize this part of the business and increase its viability, several numbers of older staffs from the stem cell business of the company have been departed. The group has spent in resolving legacy issues of around £900,000 and also remains to work on legacy liabilities correlated to this organisation on a continuing basis.

As announced on May 1, 2019, HGOSF (High Growth Opportunities Securitization Fund) remains supportive as shown by the attachment of a conversion floor price mechanism.  This puts an estimated floor on the price of around 0.4 pence.  Initially, it was announced of £1,600,000, but there is a further £500,000 offered under the drawdown facility. 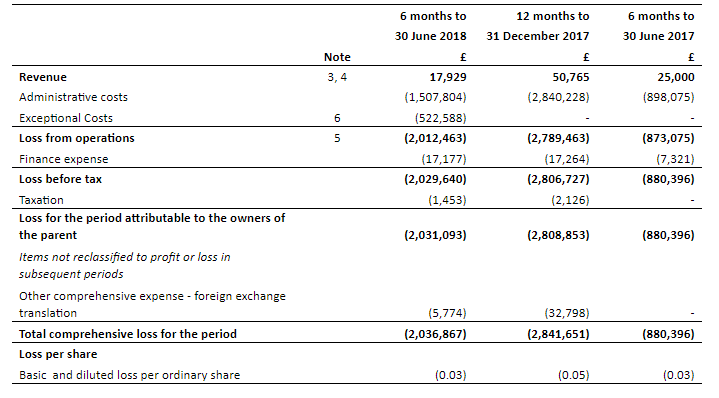 The company’s reported revenue stood at £17.9 thousand, a decrease from the corresponding period of last year, due to a decline in the UK business. Loss from operations increased from £873 thousand in H1 FY17 to £2,012 thousand in H1 FY18. The Loss for the period was £2.03 million against the previous year same period data.

Underlying administration costs thus surged from £0.90 million in H1 FY17 to £1.51 million in H1 FY18, due to the £0.3 million relates to resourcing the WideCells division in anticipation of being granted an HTA (Human Tissue Authority) licence to commence storage and processing services, and £0.2 million surge in the investment in the Wideacademy platform and related staffing. Basic and diluted loss per ordinary share stood at 0.03 pence.

The company was successful in securing a placing for £2.06 million, supported by a revised strategy that was based on a decrease in future cost investment and an expectation of significant revenues in H2 2018, mainly from the Wideacademy and CellPlan division. However, after costs and the conversion of current loans into shares as part of the placing, the company received only £1.66 million in new cash, which decreased further when the company was incapable to convert its overdraft, which by then had risen to £0.62 million, to longer-term debt and was thus repaid from the placing funds.

At the time of writing (as on 18th June 2019, at 3:29 PM GMT), shares of the Widecells Group PLC were quoting at GBX 0.3360/share and decreased by 4 per cent as compared with the previous day closing. The outstanding market capitalisation of the group stood at £4.22 million and is listed on the LSE (London Stock Exchange).

From the SMA (simple moving average) standpoint, shares of the Widecells Group PLC were trading considerably below the 30-day and 200-day but marginally above the 60-day SMA price level.

The stock has delivered a beta of 0.44x, which indicates that the stock is less volatile against the benchmark index.

WideCells Group PLC has undoubtedly faced several challenges during the period under review.  As a result, the company had to implement several changes to the business model. The company Board's goal is to make long-term sustained shareholder value, but its instant duty must be to save the financial viability of the company to make that value in the coming year.

The stem cell market value fundamentals remain unchanged. The company is a part of a rapidly growing stem cell industry, currently valued at $96 billion and expected to grow to $170 billion by 2020 and $270.5 billion by 2025.

The group has a hostile growth strategy, with targeted acquisitions. In future, the company looks to support its events over more traditional forms of equity and debt issuance.