Analytical measurements of processes, online controls and asset monitoring is provided by In-line Instrumentation segment. It is also associated with converting industries providing consumables and services for key processing. 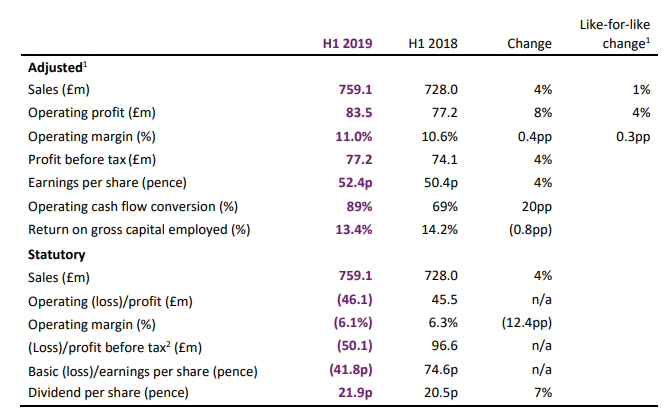 In H1 FY19, the company’s adjusted sales increased by 4 per cent as compared with the corresponding period of the last year, due to the increase in like-for-like sales of 1 per cent, growth from acquisition, net of disposals, which contributed £7.1 million, and favourable foreign exchange movements of £15.7 million.  Adjusted operating profit rose by 8 per cent to £83.5 million against the £77.2 million in H1 FY18, while like-for-like operating profit increased by 4 per cent. On a statutory basis, operating loss stood at £46.1 million. Adjusted operating margins were 11 per cent, an increase of 0.4% against 10.6% in H1 FY18. LFL gross margin declined to 55.2 per cent in H1 2019, impacted by adverse product mix, input cost inflation, and higher production overheads.

In the first half of 2019, the company delivered an in-line result, despite the challenging macroeconomic environment. In H1 FY19, while there was moderation in LFL sales, profitability, and cash conversion increased. For the full year 2019, the company’s prospects remain decent, though the current macroeconomic conditions make it a bit more challenging. In the second half of 2019, the company expects to continue benefitting from the profit improvement programme. The company has completed its strategic review and is clear on the prospects and potential ahead. The company is now focused on creating significant value for the employees, customers, and shareholders and executing the strategy for profitable growth. In the financial year 2019, benefits from profit enhancement programme is now projected at the upper end of the £15-20 million range with the expected exit run rate of £30 million.

Daily Chart as on 07-August-19, before the market close (Source: Thomson Reuters)

Ferrexpo Plc (FXPO) is a Swiss iron ore mining company. It is involved into the production, processing and export of iron ore pellets. The company’s assets are situated in the Poltava region of Ukraine. The company serves customers in Europe and Asia including Slovakia, Austria, China, South Korea, Germany, Czech Republic, Taiwan, Turkey, Vietnam and Japan. Ferrexpo also carries out ore processing and logistics operations. The company is in the business of processing, mining and selling top notch iron ore pellets to the worldwide steel industry for more than 40 years. 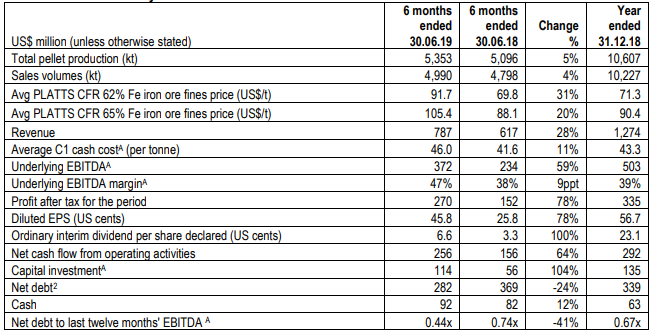 The company is the 3rd largest exporter of pellets and has maintained top-notch quality and at a lower cost. The company sells its product to world-class customers which include big corporates from the steel industry. The company is able to maintain adequate capital allocation between a strong balance sheet, investments required for growth and returns to shareholders. The company has well established internal control systems which helps it to mitigate the risks associated with the operations of the company. The company might face macro headwinds with respect to higher input prices of commodities, local inflation in the Ukrainian economy and Brexit – related uncertainties.

Disruption to the company’s operations could be due to a deterioration of the geopolitical situation in Ukraine; strengthening of UAH vs the USD; weaker-than-expected pellet premiums; and higher-than-expected mining cost inflation in Ukraine. In H1 FY19, the company continued gaining from robust pricing for the higher quality of iron ore pellets, which augmented cash inflows. In some regions, steel demand is muted and reflecting weaker end-user demand and higher raw material costs. The company’s pricing power remains protected against the historical levels. The company had shown improvement in its top and bottom-line performances in the current half-year and will be able to increase its production in the upcoming financial year.  On 8th October 2019, the company is expected to announce Q3 FY19 production results.

Daily Chart as an 07-August-19, before the market close (Source: Thomson Reuters)