On 4th September 2019, at the time of London stock markets’ closing, housebuilder Taylor Wimpey PLC, Persimmon PLC and DS Smith PLC, which is into the business of general industrials, were among the day's top performers on the FTSE 100, each moving up by around 3%.

Trading Statement (as on 3rd September 2019)

In the current scenario, the company continues to progress well despite the macro-economic uncertainty, and the prospects for overall financial performance remain unchanged. The outstanding client engagement and differentiators of service, innovation, scale, and quality have enabled robust pricing discipline. This, combined through ongoing operating cost-effectiveness and emphasis on cash flow generation, together with new business wins in the US and Europe, gives the company confidence in the resilient commercial model in spite of ongoing subdued volumes in several markets, in particular, those economies with substantial export-led market exposure.

On 9th July 2019, the company reported that Kathleen O'Donovan would retire from the group’s Board with effect from the conclusion of the 2019 Annual General Meeting on 3rd September. The company also announced the appointment of Non-Executive Director, Celia Baxter, to the group's Board. Celia Baxter will join the Nomination Committee, the Audit Committee, and the Remuneration Committee.

On 1st July 2019, the company had accomplished the sale of two packaging businesses in Portugal and France to International Paper for £56 million (€63 million).

The specialised offering helps to boost continuing market share and volume growth and the underlying drivers of demand for supportable corrugated packaging. In Germany, the company said that they saw volume weakness in certain export markets, but the group expects this to progress during the current financial year. Focus on operating efficiencies, cash flows, and pricing discipline support the opportunities for further progress in the coming year. The company’s capital expenditure plan of balancing asset renewal and an increase in investment opportunities and efficiency has been maintained.

Through a strong FMCG presence and focus on e-commerce, the company continues to win market share. Strategic acquisitions, along with strong organic growth, have considerably improved the company’s financial position, which has made the market confident about the prospects of the business.

In Indiana, the construction of the greenfield packaging plant will significantly increase the capability in the United States and decrease the long paper position, with production anticipated to start in this financial year 2020. Before the end of this calendar year, the company is expecting the completion of the disposal of the Plastics division.

(Daily Chart for the prior year as at September 05, 2019, before the market closed)

Taylor Wimpey Plc (TW), which was formed post the merger of George Wimpey and Taylor Woodrow and is known for building various types of homes in the UK, seems to be on investors' radar lately given the overall economic and house price scenario. 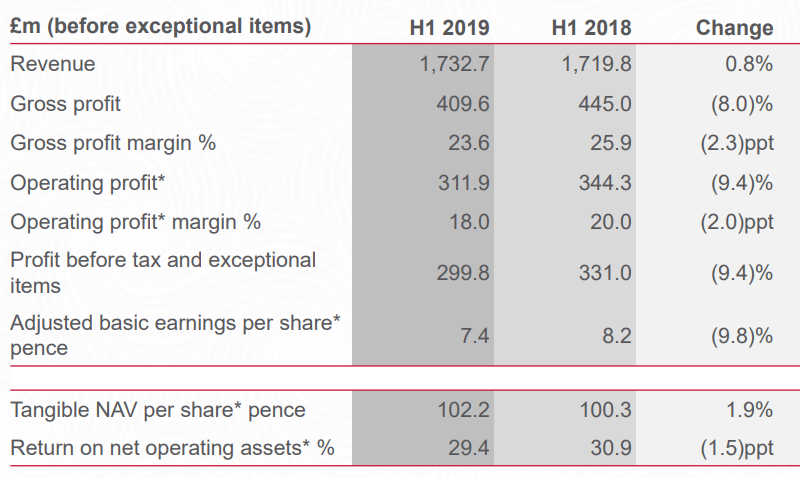 In the full year 2019, the company expect the results to be in line with expectations. The company anticipate full-year 2019 volumes to be slightly higher from the financial year 2018. As the company have seen results from the planned approach to huge sites effect more quickly than anticipated. During this environment where pricing remained flat, and there is a rise in build cost, the margins will decrease in FY19 against the FY18.

The company continue to monitor the market for any changes and client trends closely and manage the corporate cautiously, mainly against the backdrop of the ongoing macro and political uncertainty. The company is impacted by Brexit but still had been able to meet expected sales expectations. The company is well-positioned with a robust balance sheet and order book.

(Source: Thomson Reuters) Daily Chart for the prior year as at September 05, 2019, before the market close

Persimmon Plc (PSN) is a leading British housebuilder and is headquartered in York, United Kingdom. The group is a part of FTSE 100 index and is listed on the LSE (London Stock Exchange). The company has 31 regional offices in the United Kingdom, and it trades under brands such as Charles Church, Persimmon Homes and Westbury Partnerships over England, Wales and Scotland.

The housing market has been under huge stress lately, and weak sterling has translated into a higher cost of inputs, which was evident from lower margins, as uncertainties persist regarding the future trajectory of the UK economy after Brexit. However, the current forward sales position remained strong, with total forward sales revenue of £2.048 billion as consumer confidence remained resilient, benefitting from a competitive mortgage market, high levels of employment and low-interest rates.

The company has continued to attract good customer interest with the total visitor levels being comparable to the previous year, and it provides a wide range and choice of new homes on all its developments, with an emphasis on first-time buyers. Though political uncertainty is holding back new housing purchases and construction, the central bank is expected to seek an expansionary monetary policy, which would further decrease the cost of funds.

The Help to Buy scheme, which is to be in place till 2023, has helped the company in posting strong results, while company’s focus on low to mid housing market and in North England helps it to cushion the blow from Brexit-related effects on the property market.

(Source: Thomson Reuters) Daily Chart for the prior year as at September 05, 2019, before the market close