Pembridge Resources Plc (PERE) is a mining company, which invests in a portfolio comprising of base and precious metals. The Americas, Europe and sub-Saharan Africa are the focus areas.  The group is engaged in the development and exploration of base metals, mainly zinc and lead. China Africa Resources Namibia Ltd is a subsidiary of the group. The company looks to deliver its shareholders capital appreciation in the longer term and supplementing it with dividends in the medium term.

The company has entered into a share purchase agreement (SPA) with Capstone Mining Corp. and closed the deal for 100 per cent acquisition of Minto Explorations Ltd. Minto, in central Yukon, is an underground copper-gold-silver mine. Copper Holdings and Lion Point have entered into the agreement as financing entities. The total payments to be made to Capstone comprises $20 million out of which $10 million has been secured from Copper Holdings and Lion Point.

The payment has been scheduled in stages, which shall enable Minto in generating positive cash flow before making payments to Capstone. The first payment of $5 million to Capstone will be made once the production reaches to 60 per cent of the mill capacity. The second payment of $5 million to Capstone will be made as the production is maintained at 60 per cent and the price of copper has averaged out for two consecutive quarters. The third and the final payment of $10 million will be made upon the copper price has achieved an average price of $3.50/lb for two consecutive quarters. The company has decided upon initiatives to extend the life of mine and improve operating margins. 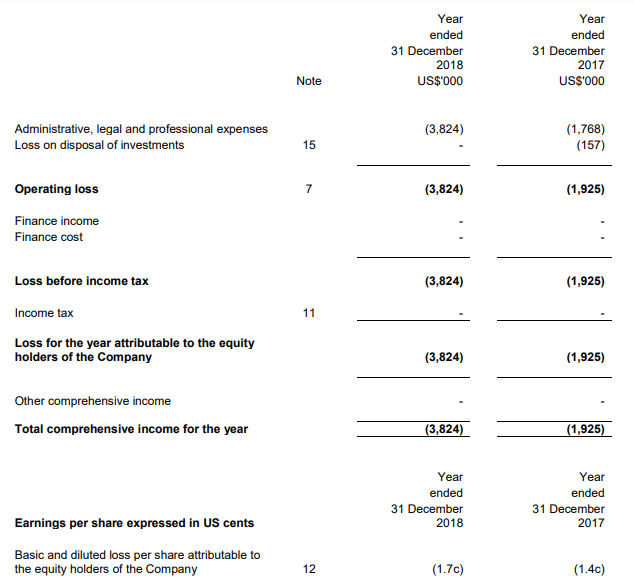 Total assets decreased from US$2.4 million in FY17 to US$0.6 million in FY18, due to the decline in the cash and cash equivalents. The closing cash and cash equivalents balance stood at US$0.151 million at 31st December 2018 as compared to US$2.027 million at 31st December 2017. Equity attributable to shareholders of the company declined to negative US$1.7 million, driven by the huge loss occurred in the financial year 2018.

On the announcement of the Minto acquisition transaction, the company’s ordinary share price was suspended at 1.275 pence.

The company is subject to numerous risks and uncertainties, including the impact of general economic and political conditions, industry conditions, the volatility of commodity prices, currency fluctuations, environmental risks, changes in environmental, tax and royalty legislation or other government regulation.

Strategic growth initiatives, technological advancements, and increasing global usage of copper may provide new growth opportunities to the company. However, the rising labour shortage in Europe, operational risks and stringent regulations could affect the company’s operations.

An adverse movement in the commodity prices has the potential to negatively impact the profitability and economic viability of the company’s projects. Further, the company’s ability to raise funds will come under strain in such a scenario. Moreover, the fall witnessed industry-wide provides the company with an opportunity to buy at a lower price.  The company’s business model of investing in projects at an early stage is highly risky and demands a deep fundamental understanding of the resource.

Metal and mining companies are subject to various risks associated with the industry and its processes. These risks range from prospecting to extraction and getting the product to the market. The risks include project risks, social risks, technical risks, and product chain risks.

The acquisition transaction assumes economic benefits only from Minto, not from any further transactions that may be entered by the company. Concurrent with signing of the SPA, around £400 thousand of working capital for the company has been raised at 16 pence per ordinary share of nominal value 1 pence each in the capital of the group, an around 25 per cent premium to the price per ordinary share at which the Ordinary Shares were suspended on 14 February 2018.