US Market News: The major indices of Wall Street traded in a red zone as investors waited for the crucial Federal Reserve’s policy meeting. Among the gaining stocks, F5 Networks (FFIV) shares surged by about 6.55% after the Company had posted strong quarterly earnings and revenue boosted by pandemic-induced growth in digital business applications. General Electric (GE) shares went up by about 1.24% after the Company reported a positive cash flow for the second quarter. Among the declining stocks, Intel (INTC) shares dropped by about 3.25% after the Company set out a multi-year revival plan to regain lost market share. Tesla (TSLA) shares went down by around 2.68%, even after the Company’s second-quarter earnings came out to be more than the consensus estimates.

UK Market News: The London markets traded in a red zone due to the weak performance of the mining stocks. According to the Confederation of British Industry (“CBI”), UK retail sales had witnessed a marginal drop in July 2021.

FTSE 100 listed Reckitt Benckiser Group shares plunged by about 8.32% after the Company reported a net loss during the first half as it wrote down the value of the Infant Formula and China Nutrition assets.

Moonpig Group shares dropped by around 10.12% after the Company had warned regarding a drop in sales as Covid-19 restrictions got relaxed. Nonetheless, the Company had reported a significant jump in revenue and profitability during FY21.

Ascential had raised around 153 million pounds to strengthen the balance sheet.  Furthermore, the shares went down by around 6.29%.

Croda International shares climbed by around 6.33% after the Company had reported a significant jump in revenue and profit during H1 FY21. Moreover, the Company also stated that the annual profit would remain ahead of the expectations. 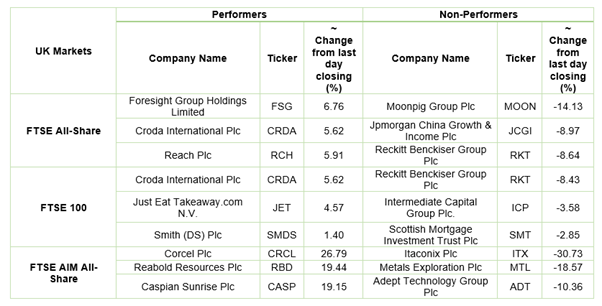