US Market News: The major indices of Wall Street traded in a green zone as investors waited for the Federal Reserve Chair Jerome Powell's remarks. Among the gaining stocks, CrowdStrike Holdings (CRWD) shares surged by about 7.92% after the Company was upgraded by Stifel Financial from “Hold” to “Buy”. GameStop (GME) shares went up by about 4.93% after the Company had successfully raised USD 1.13 billion in the latest stock offering. Korn Ferry (KFY) shares rose by about 3.18% after the Company had reported quarterly earnings more than the consensus estimates. Among the declining stocks, MicroVision (MVIS) shares plunged by around 12.65% after the laser technology Company had decided to sell USD 140 million worth of shares.

Global Market Round Up || Here's Why British & US Equities Inched Higher

UK Market News: The London markets traded in a green zone, reflecting positive investors sentiments after reassuring comments given by the New York Federal Reserve President John Williams. According to the Office for National Statistics, the UK public sector net borrowing had decreased to 24.33 billion pounds in May 2021, while it was 43.76 billion pounds in the previous year.

Melrose Industries shares rose by about 2.12% after the Company had decided to return a significant amount of cash to shareholders post completing the sale of Nortek Air Management Business.

National Express Group had updated that the trading performance remained slightly ahead of the expectations and announced the acquisition of Spanish urban bus operator Transporters Rober. Moreover, the shares grew by approximately 1.51%.

Aston Martin shares dropped by around 1.48% after the Company commenced the legal proceedings against Nebula Project AG.

Packaging Company DS Smith shares went down by around 0.79% after the Company reported a sharp drop in annual profits due to higher cost and low price during the pandemic. 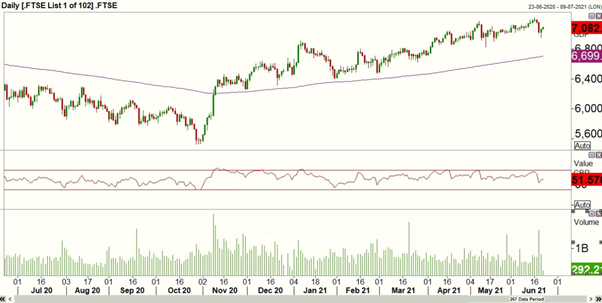