Sweden based electric vehicle (EV) maker, Polestar, is planning a public listing by merging with a special purpose acquisition company (SPAC), Gores Guggenheim, according to a Wall Street Journal report.

The combined entity following the SPAC merger is expected to have a valuation of US$ 21 billion, including debt. Polestar’s deal with Gores Guggenheim may occur as early as today or by this week.

The company was in SPAC related talks with Gores Guggenheim earlier this year in June, according to a previous Wall Street Journal report. 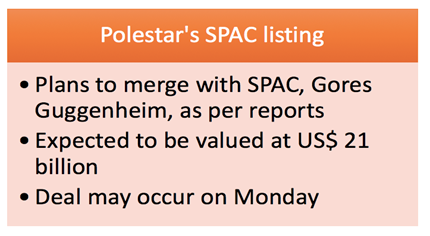 As of now a deal is yet to be finalised, and the terms of the deal could change at any moment.

Earlier this year, the company had raised about US$ 550 million in external funding. Also, Gores and Guggenheim had raised up to US$ 800 million in a March IPO this year.

It started production of the Polestar 2 model, the company’s second and fully electric car model, in March. The production is based at a Zhejiang Geely plant in Luqiao, China.

Polestar had also stated earlier this year that another model, the Polestar Precept, is also expected to start production this month, in September. This model’s interior is planned to be made from recyclable items such as PET bottles, cork vinyl and even reclaimed fishing nets.

Furthermore, the company had also announced back in June that Polestar 3, which is the company’s sport utility vehicle (SUV) model, will be manufactured at a Volvo cars plant located in Ridgeville, South Carolina. The model’s global production is expected to begin next year, in H2 2022. The Volo cars manufacturing plant was built in 2018.

Should the deal go through, it will help Polestar gain better access to US markets and enable it to better compete with Tesla. It will also aid in raising funds for its US based production, among other factors.

There has been an increasing trend this year of companies choosing to float on the market via a SPAC listing instead of taking the traditional IPO route. SPACs have gained favour due to it being an easier way of listing compared to a traditional IPO.

If this transaction reaches an agreement, Polestar will be the latest in several EV and EV related companies to have opted for a SPAC listing in the past one to two years.

Polestar’s competitor, Lucid Motors, also listed this year in February via a blank cheque firm Churchill Capital IV Corp, which gave it a combined valuation of US$ 11.75 billion.