The Office of Budget Responsibility (OBR) has come up with a report on 14 July 2020 regarding the expected health of the British economy during the four years’ time frame of 2021 to 2024, given the current state of economic policies, debt, and unemployment levels.

The report is titled as the Fiscal Sustainability Report, and it analyses the future economic scenario from three different hypothetical states of the economy, namely the Upside, Central, and Downside Scenario.

The study forecasted that in two of the three scenarios, the UK’s GDP would contract between 3 and 6 per cent over the four-year period between 2021 to 2024, while in the best-case scenario, the economy will fully recover to its pre-corona economic output levels by the year 2024.

While also commenting on the current state of public debt in the country and terming it as unsustainable, it advises the government to raise taxes by at least 50 per cent or £60 billion if the fiscal situation in the country is to be kept under manageable levels.

In the upside scenario, the OBR expects that the British economy will be able to recover quickly from the pandemic ordeal and economic activity levels in the country will be back to the pre-virus attack levels by the first quarter of 2021 with no permanent damage to the economy.

The budget deficit under this scenario will be close to 2.2 per cent by 2024-25, which is close to 2020’s March forecast. The unemployment rate under this scenario will be about 10 per cent by the third quarter of 2020 and will eventually return back to 4.1 per cent levels that existed in March this year by 2024-25. Most of the industries will be able to bounce back within a year, and there will be no long-term structural damage to the economy.

In the central scenario, it is envisaged that the state of economic recovery would be slower, and it could take up to the mid of 2022 for the country’s economy to get back to the early 2020 pre-virus attack levels. The underlying assumptions of this scenario are that an effective vaccine is developed, and it takes about a year to deliver. This scenario also presumes that unemployment levels will remain on the higher side, there would be a substantial number of business failures across the country.

According to the OBR analysis, under this scenario, the output of the economy would by 3 per cent in the medium term, and the budget deficit would fall to 4.6 per cent of the GDP in the 2024-25 timeframe. The unemployment rate under this scenario would be around 12 per cent by the fourth quarter of 2020 and will improve to 5.3 per cent levels by 2024-25. The structural damage to the economy under this scenario will be moderate with the GDP to public debt ratio remaining high, assuming that the government sticks to its policy of not going the austerity route.

In the worst-case scenario, the OBR assumes that the virus attack becomes an endemic (means an indigenous characteristic of a population, which does not have an effective treatment) with the vaccine development work not yielding any useful results.  Under such circumstances, social distancing measures have to be maintained for an elongated period of time, and as a consequence, most businesses in the country would not be able to fully recover to pre-March 2020 levels. Consequently, the number of businesses failing and the resultant unemployment levels would also very high in the country.

The economic output under this scenario would fall by 6 per cent by the year 2024-25, and the budget deficit would fall sharply to 6.8 per cent of the GDP during that period. The unemployment rate for this scenario is estimated to be around 13 per cent by the first quarter of 2021, which will improve to 6.3 per cent by 2024-25. While the structural damage to the economy will be high, and strong measures will be required to contain the public debt levels.

Unemployment forecasts under the three scenarios envisaged by the OBR 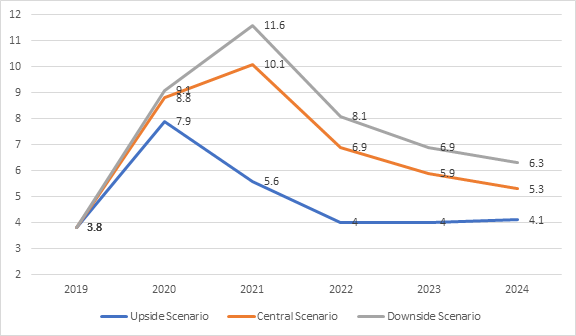 The most likely turn of events

Well, first of all, it is not easy to make any clear predictions are we are undergoing unprecedented and highly uncertain times. However, having said that, the likelihood of the downside scenario playing out is a little remote.

The pandemic is already showing signs of moderation and the chances of an effective vaccine coming out by the end of this year are quite high. Though the pandemic is far from being under control, the economic activity in the country has already started to pick up with important sectors like manufacturing and construction already getting back to recovery, though slow.

The government had also started to re-open the economy with gradual removal of most restrictions, except the necessary health and social distancing measures. People are trying to follow them in order to protect themselves from catching the Covid-19 infection. It is thus, an important factor that is noteworthy at this juncture that despite the widespread resumption of business activity levels in the country, infection levels have not risen at the same pace between May and June 2020, as were seen during March and April 2020.

There are, however, two important risk factors that still need to be kept in mind. First, there is a major risk of a resurgence of the viral infection once winter sets in during the last quarter of the year. Under such eventuality, the government might be forced to impose a lockdown again which will once again slow down the economy. Second, if there is a delay in the availability of the vaccine, the government might be forced to further increase its borrowings to protect businesses and livelihoods in the country.

As a summary, the Office of the Budget Responsibility has released its fiscal responsibility report on 14 July 2020. It presents three cases (central, upside and downside) for the path to economic recovery during the next four years between 2021 to 2024. In the best-case scenario, the economy will quickly recover to its pre-Covid levels, without any permanent scars. However, in the worst-case scenario, it would have slowed down by 6 per cent by the end of year 2024 as compared to its 2020 level. While the UK government has time and again reiterated its position that it will not go down the austerity route to retire off the debts it has taken till now. However, it looks like that the only possibility to reduce public borrowing is a widening of the tax base and increase in the prevailing tax rates, in the long-term.