An Insight Into Conroy Gold And Natural Resources Plc

Conroy Gold and Natural Resources Plc, the AIM listed Gold miner, is inundated with so many offers these days, that the stock is providing attractive returns over 1-month  and 3-month periods, even before any mining work is yet to produce any significant amount of metal at its license locations in Ireland. The founder and chairman of the company Professor Richard Conroy is a very busy man these days, shuffling through the many proposals he is getting from prospective investors and venture partners hailing from far and wide and has turned a guide of sorts providing them site tours.

Ireland’s tryst with mining dating back to the Bronze Age (2000 B.C.). At the time southwest Ireland, with locations at Ross Island, Kerry, Allihies, Cork and later Bunmahon and Waterford, were prominent mining and refining centers of copper and alluvial gold (loose deposits found in streams), which at that time was used extensively in the making artefacts such as coins and jewelry ornaments. There were iron works in that area dating back to the era of 16th and 17th centuries, which flourished rapidly during the late 18th century because of the huge demand created by the burgeoning British industrial revolution that was taking place during the period. This era was the golden period for Ireland as almost every county in that country during that period had at least one metal mine within its geographical spread.

Then there was this great gold rush period in that country between the years 1795 and 1830 at the site of Gold Mines River (Co. Wicklow), during which period approximately 7000 oz-9,000 oz of the precious metal was extracted from alluvial gravels in the banks and riverbed of the area. Later during the 20th and 21st century era gold-mining proposals had to face with substantial resistance in the area because of the anticipated environmental impacts. In today’s era the country is a major zinc-lead mining abode.

During the past four decades with a series of significant base metal ore findings having been made in that area, which include the massive ore deposits at Navan (>70Mt), the country has become a metals major in Europe. The Zinc-lead mineralization of the country are as of now being mined from two other underground mining operations in south-central areas of the country by the names Lisheen and Galmoy. The totalized production from these two underground assets, make the country the biggest zinc producing country of Europe and the second biggest lead producing country of the continent as well. As of 2007, the country produced about 38 per cent of Western Europe’s zinc and 25 per cent of the area’s lead.  The names of the lead and zinc mining assets in the country include the Lisheen Mine asset, the Tipperary mise asset, the Tara Mine asset, the Meath asset, the Galmoy Mine asset and the Kilkenny asset.

The mining and mineral exploration companies having operations in the west European country include Anglo-American Plc company, the Arcon company, the New Boliden company, the Conroy Diamonds and Gold company, Hereward Ventures Plc company and the Minco Mining & Metals Corporation.

The founder and chairman of Conroy Gold and Natural Resources Plc Professor Richard Conroy is a veteran and has been involved in natural resources exploration for many years now. He has established the Trans-International Oil; whose main business activity was Irish offshore crude oil exploration. The company was the initiator of the Deminex Consortium which included corporations like Deminex, Mobil corporation of The Unites States, Amoco and DSM corporations. The company, however, was merged with Aran Energy Plc company in the year 1979, which subsequently was again bought over by the Statoil company. Professor Conroy after this venture went on to be the founder of another company called Conroy Petroleum and Natural Resources Plc. (“Conroy Petroleum”). The company was involved in both onshore and offshore crude oil production and exploration activities as well as in mineral exploration. The company’s mineral exploration arm, in 1986, was the one to have made the very important discovery of the Galmoy zinc mines in County Kilkenny which was later developed as a major zinc resource of that country.

Give the vast experience of Professor Conroy in the mining and exploration sector in Ireland, it is but expected that the reserves discovered by Conroy Gold and Natural Resources plc in the Longford Down massif area, which straddles the border between north and south Ireland, and now boasts of the four major target areas along the forty mile trend, will receive its due share of attention from investors and minors from far and wide who are aware of the history of the past ventures of its founders. The company on its part is also doing a good job at attracting prospective investors’ and prospective venture partners’ attention.  The company has been a regular exhibit at the Prospectors & Developers Association of Canada (PDAC) Trade Show and annual convention that takes place in Toronto Canada, which attracts tens of thousands of attendees form across the world. Apart from that, the company also regularly publishes its mining and exploration update for its shareholders via stock exchange information services of the London Stock Exchange.

The company in Ireland owns 100 per cent of the licenses over a 700 square kilometers area in the country. A back-of-the-hand calculation using the existing half-a-million ounce reserve at the Clontibret prospect in the County of Monaghan produces a JORC exploration target of 8.8 million ounces in the north-eastern parts of the company’s landholding alone. There is a lot of exploration work still to be done in that area, but there’s already an economic assessment of that area from the neighboring Clontibret project, which points towards the very attractive potential for the development of the prospect and opens up several doors for the company.

The company got its shares listed on the AIM segment of the London Stock Exchange where they trade with the ticker name CGNR.

The company on 28 February 2019 came out with its interim results for the six-month period ending on 30 November 2018. 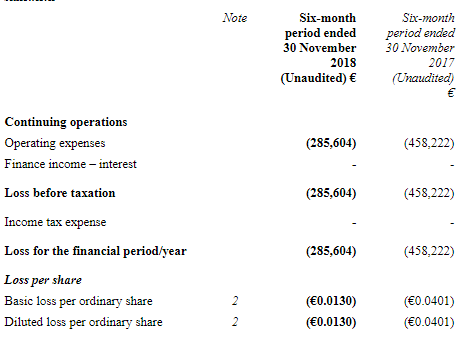 Price Chart as on 07 October 2019, before the market close (Source: Thomson Reuters)

With the prices of gold hovering around the US$1500/ ounce level, the major discoveries made during the year by Conroy Gold and Natural Resources plc add significant value to the overall shareholder value. The company is in the process of carefully examining the venture partnerships and strategic investment deals that are coming its way.

The massive gold mineral resources that the company has discovered and is sitting on in Ireland will surely make it one of the most valuable companies in the world in this business. Professor Richard Conroy is no novice in this business; his vast experience in the field and connections with industry bigwigs and elite investor class and a successful career in promoting and leading high value creating companies make him another very valuable asset that this company possesses.

Given the above two factors the company could very well be one of the highest value-creating, gold mining companies listed on the AIM segment of the London Stock Exchange.