Ocado Group PLC (OCDO) is one of the largest online grocery retailers in the UK, which does not own any chain of stores as all home deliveries are done from its warehouses, as it has developed and operates a unique business model which positions it strongly as more consumers choose to shop online. Its business is based on proprietary technology and intellectual patent, which serves the unique end-to-end operating solution for online grocery retail operations and positions the group well to take advantage of these long-term structural trends, driven by different shopping habits and ever more advanced technology for the consumer. 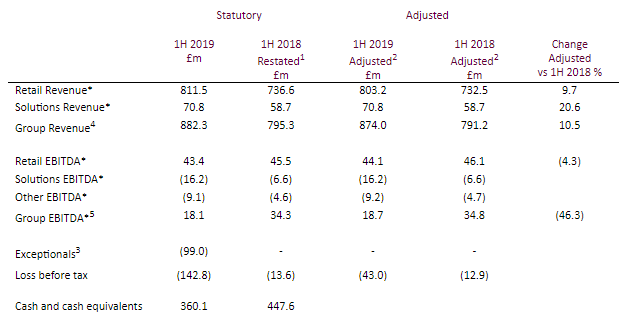 The company’s adjusted revenue increased by 10.5 per cent to £874 million as compared to £791.2 million in H1 FY18, driven by other fees earned from Morrisons, a surge in the average number of orders per week and despite capacity limitations following the fire at CFC Andover. Adjusted EBITDA stood at £18.7 million, a decrease of 46.3 per cent against the £34.8 million in H1 FY18, due to the investment surge in developing the head office teams required to support the international growth, higher share incentive costs in the period and annualised costs of the Erith CFC. Adjusted loss before tax was £43 million, an increase from the corresponding period of the last year. Cash and cash equivalents stood at £360.1 million, a decrease of £87.5 million against the previous year same period data. Average orders per week had solid underlying growth, with a slight decrease in the average order size. The company signed a 50/50 joint venture with M&S to transform its online grocery shopping in the United Kingdom.

JD Sports Fashion PLC (JD.) is a multichannel retailer of branded sports and casual wear, which combines the best of physical and digital retail to give a compelling consumer proposition and helping it to establish an industry-leading retail business. Ongoing investment in its international multichannel capability complements the continuing international growth in physical store space, and it uses its own brands to present them as complementary to third party brands. It has over 700 stores in 19 territories across the globe, with strong own brand labels such as Pink Soda and Supply & Demand, along with globally recognised brands such as Nike, Adidas, Puma and The North Face. The operations of the group are differentiated in two operating segments, namely Sports Fashion and Outdoor.

The software and computer service provider AVEVA Group Plc (AVV) was incorporated in 1967 and is headquartered in Cambridge, the United Kingdom. The company is engaged in providing engineering, design and information management software with geographical presence in the Asia Pacific, Americas and Europe and EMEA.

In the first half of the financial year 2020, the company’s reported revenue surged by 16.5 per cent to £391.9 million as compared with the corresponding period of the last year, while recurring revenue surged by 42.1 per cent to £242.5 million in H1 FY20 (H1 FY19: £170.7 million). On a constant currency basis, the organic revenue growth was of 11.9 per cent reflected robust sales execution and benefited from initial contract renewals. The increase in revenue was because of the good growth across all geographic areas with the Asia Pacific showing strength. Each of the Business Units also increased, with particularly robust growth in Engineering. In H1 FY20, the adjusted EBIT surged by 66.5 per cent to £90.6 million against the £54.4 million in H1 FY19, driven by the revenue growth, higher gross margin and operational leverage. Adjusted EBIT margin was reported at 23.1 per cent, an increase of 690bps from the corresponding period of the last year. The profit before tax was £24 million in H1 FY20 versus a loss of £5.5 million in H1 FY19. The adjusted diluted earnings per share surged by 65 per cent to 43.31 pence against the 26.25 pence in H1 FY19, while reported diluted earnings per share stood at 11.13 pence in H1 FY20. Interim dividend per share was up by 10.7 per cent to 15.5 pence in H1 FY20.