Is This The Right Time To Invest In Blockchain Stocks?

Bitcoin’s price crossed US$18,000 during intraday trading on November 17 as investors turned bullish on crypto during pandemic. The largest cryptocurrency by market cap touched a high of $18,062 on November 17, a peak not seen since December 16, 2017. The cryptocurrency is now fast approaching all-time high price of US$19,666.

As we move towards cashless transaction era, the use of cryptocurrencies has been projected as the future of payment. Virtual currencies are finding growing acceptance in the Canadian payment market and attracting the interest of investors.

The Bank for International Settlements (BIS) and other central banks, including the Bank of Canada, recently released its first central bank digital currency (CBDC) report in October. The report laid out some basic principles for virtual currencies such as coexistence with cash and innovative payment ecosystem, no harm to monetary and financial stability, and promote innovation and efficiency.

Blockchain offers a platform for generating coins, but in limited numbers, as prescribed by its underlying software. When the demand is high for crypto coins, there is a fluctuation in the value of crypto assets. This speculative money increases the crypto price.

The Covid-19 pandemic has augmented the usage of digital payment and cryptocurrencies. And these virtual currencies are powered by Blockchain technology. Consequently, blockchain stocks are also on the rise.

In the wake of these developments, let us look at the following blockchain stocks: Riot Blockchain Inc (NASDAQ: RIOT, RIOT: US), Hive Blockchain Technologies Ltd. (TSXV: HIVE), and The Bitcoin Fund (TSX: QBTC.U).

Riot Blockchain builds and operates blockchain technologies. Its stocks have rocketed over 836 per cent since the pandemic-led crisis on March 19. In the last three months alone, the stock has surged by nearly 65 per cent. The year-to-date performance of the scrips indicates a massive 433 per cent growth.

The company has appointed Hubert Marleau to the Company's Board of Directors on November 17. 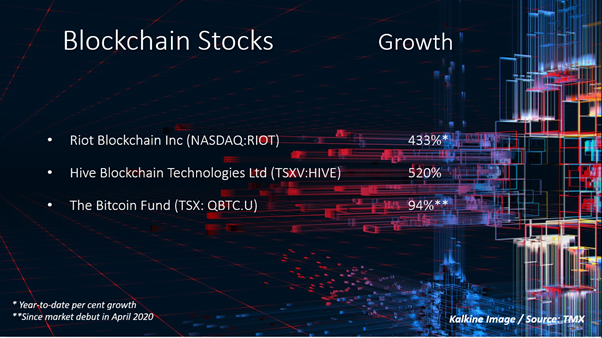 Its stocks have swelled over 287 per cent since the pandemic-led crisis on March 19. In the last three months, the stock has soared by nearly 33 per cent. The year-to-date performance of the scrips indicates 520 per cent growth.

Its 10-day average share trading volume is 2.97 million units. HIVE’s current market cap stands at C$ 214 million. The blockchain company’s profit-to-book (P/B) ratio is 6.20 and its price-to-cashflow ratio is 340, as per the TMX portal.

The company generated income from digital currency mining of US$ 6.6 million in Q1 FY21 ended on June 30, 2020. The digital mining company reported an adjusted EBITDA of US$ 2.6 million in Q1 FY21. Hive Blockchain Technologies recorded a net income of US$ 1.8 million for the quarter.

The company posted the mining output of newly minted digital currencies: 25,572 Ethereum and 154 Bitcoin. This represents an increase from the nearly 25,000 Ethereum mined in HIVE's first fiscal quarter ended June 30, 2020, and a more than 50 per cent surge compared to the same period last year.

The Bitcoin Fund provides exposure to cryptocurrency bitcoin for long-term capital appreciation opportunity. This fund invests in long-term holdings of bitcoin a substitute to a direct investment in bitcoin.

The Bitcoin Fund stocks have soared over 94 per cent since the fund started trading on the TSX. In the last three months, the stock has grown by nearly 21 per cent. The 6-month performance of the scrips shows a 92 per cent surge.

It has announced an overnight treasury offering of 2,850,000 Class A stocks. The Fund is expecting to raise nearly C$ 75.6 million through this.

The offering is likely to be closed on or about November 20, 2020. It is binding to certain closing conditions like approval by the TSX.