What is proved reserves?

As per the classification of reserves from the SPE (The Society of Petroleum Engineers), proved reserves are those reserves that are determined to have at least 90% likelihood of being recuperated as per the geological and engineering assessment under existing economic and operating conditions.

What are the main reserve types?

Extensively, reserves are organized into three primary classes by SPE (Society of Petroleum Engineers) depending on the likelihood to be recovered. Amongst the three main classifications of reserves, one is Possible reserves, another is Proved reserves, and the last one is Probable reserves. Specialists are using the above-stated classes in the assessment of a company which is also termed as Fair Market Value. 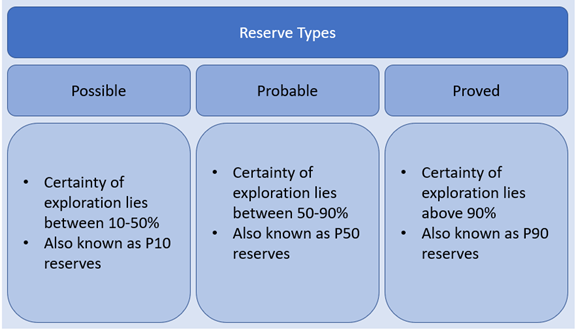 Quantitative risk analysis involved in the exploration of a particular reservoir is necessary for proper investment planning, decision making and predicting future forecast. Usually, reserve estimation is based on a deterministic measurement technique and not on the probabilistic measurement, which consists of various mathematical calculations for risk assessment.

Deterministic measurement techniques utilized for risk assessment will indicate that there is a high degree of confidence in the recovery of estimated reserves. On the other hand, if probabilistic techniques are being used, there should be at least 90% likelihood that the recovered amounts will be equal to or will exceed the estimated amount.

The reserves that are kept under the category of Proved reserves will have a presence confirmed by drilling & fluid contacts like gas-oil and/or oil-water contacts. The undrilled reservoir that can be made commercially active based on available geological and engineering data.

Reserves in which commercial production can be made using technological improvements can also be included in this category.

What are Proved Reserves Types?

Based on the development stage at the site, proved reserves could be further classified into two main types that are Proved Developed and Proved Underdeveloped Reserves. 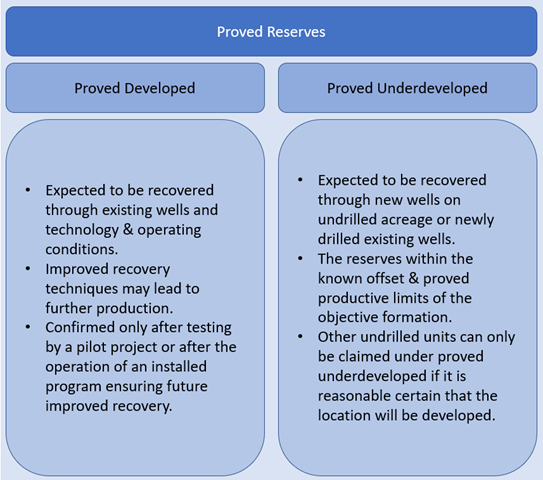 Proved Underdeveloped Reserves are those reserves which are recuperated from new wells present in undrilled areas or from existing wells which require moderately more consumption. Undrilled acreages considered under Proved Underdeveloped reserves are limited to those drilling units which are in the proximity of an already producing site. Other undrilled locations can only be declared as underdeveloped where it can be proven with certainty that there is production continuity from the current productive formation.

Estimation of reserves is done on the basis of results obtained through various geological, geophysical, and engineering assessment methods. Various reservoir parameters like porosity, permeability, saturation, and recovery factor are determined. Original Oil in Place & Gas in Place volumes are calculated. Evaluation of EUR (Estimated Ultimate Recovery) is carried on the basis of calculated reservoir parameters which help analysts to understand the volume of reserves that can be recovered. The analysis helps in proper planning, projection and decision making.

Gas volume estimation is expressed in Sales gas which is known as a raw natural gas in which further procession & fractionation is required. Typically, it is expressed at a temperature of 60 degrees Fahrenheit (°F) and a pressure base of 14.73 pounds per square inch absolute (psia). Sales gas is the amount of gas which is left out after flaring, shrinkage, fuel usage and field separation.