What is a Memorandum of Understanding (MOU)?

A memorandum of understanding (MOU) is a document that expresses mutual accord between two or more parties. MOU is not a legal contract, but is can be recognized as binding on the rights and obligations mentioned in it.

It is more of a formal agreement between two or more parties and proof of their commitment to each other. MOU has been commonly opted when the parties do not want the deal to face any compulsion by law.

However, if any legal elements are mentioned in the memorandum of understanding, then the parties have to abide by it as well.

The signing of the contract showcases the willingness of the parties to move ahead and start the work/project.

Usually, in a memorandum of understanding, the details of the contracting parties and the subject matter of the agreement along with parties’ deliverables are noted.

The basic terms of the document are agreed, and the parties should sign it in order to make it mutually binding. Memorandum of Understanding starts as an initiation for negotiations. It states the scope and purpose of the negotiations talks, and it defines an intended standard line of action.

Many private and public companies, as well as government agencies, use MOU to initiate a process.

What is the Difference between MOU and Other Agreements?

The agreement is a document parties accept to work together on a project or standard work process. It contains a proposal and its acceptance by the parties involved. If anyone party breaks the terms and conditions of the agreement, the other party can go to the court and get it enforced.

At the same time, Memorandum of Understanding MOU is where both the parties propose their common intent and commit to it in the future. It is not a valid or a legal contract.

How Does a Memorandum of Understanding Work? 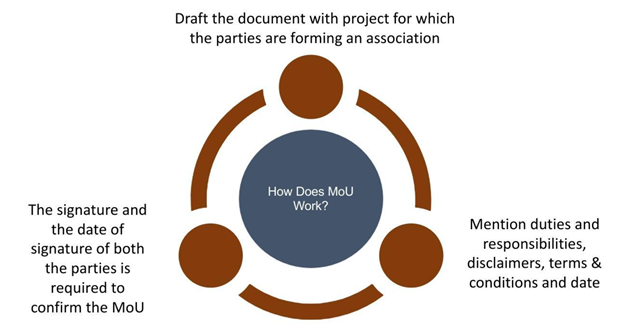 What are the Salient Features of Memorandum of Understanding?

What are the Advantages of MOU?

Primary advantage MOU offers is that the obligation under international law could be avoided. MOU can be approved and implemented without legislative approval. They are often used to modify existing government treaties.

For businesses as well, it does not hold any legal authority unless mentioned in the document. These documents are drafted with transparent terms and conditions for both the parties to abide, along with both parties’ roles and responsibilities. Hence it makes it very clear before proceeding for a project.

Both parties have explicit knowledge of their deliverables and also consequences. For instance- Party 2 will have to reprint the marketing collaterals if they have misused Party 1 logos.

How is MOU Used in International Public Law?

In international affairs, MOU comes under the category of treaties. A memorandum of understanding is registered in the United Nations Treaty Collection. The United Nations Office of Legal Affairs insists that the registration should be done. Though MOU's are sometimes labelled as confidential documents, the practice in the UN is followed to avoid any secret diplomacy.

A careful examination of the document will also explain the intent of it. The International Court of Justice has provided some insights in the past to understand the legal status of the memorandum of the understanding document (treaty).

Are there Any Risks Associated with MOU?

Not everyone agrees that the MOU is beneficial. In the event of discrepancy between the parties, MOU terms may lead to inefficient discussion and uncertain settlement outcomes in case the language and content do not indicate clear plan of action.

10 ASX stocks to watch out for this week

Is hydrogen-powered Air NZ (NZX:AIR) aircraft in the offing?

A Mining stock whose massive rise even attracted ASX’s attention

Seven ASX shares that stood out in 2021

What is memorandum of association?

Inside BlackEarth Minerals’ quest to unlock graphite potential at Maniry

Why is lithium space heating up?