Impeachment, in a layman's language, means accusation or a charge on someone. It is a formal process of stating someone guilty of high crimes or misconducts. It is usually a term used against top-level government servants, legislative officers, or ministerial position holders. It is a power given by law to keep a check on or legally punish an individual for violating rules or abusing official rights or powers. Once a person is impeached, they are then sent for trial and, if found guilty, is removed from power. This process is specifically laid out in the US by the constitution, and power has been granted to the House of Representatives to impeach an official.

What are impeachable offences under US Federal Law? 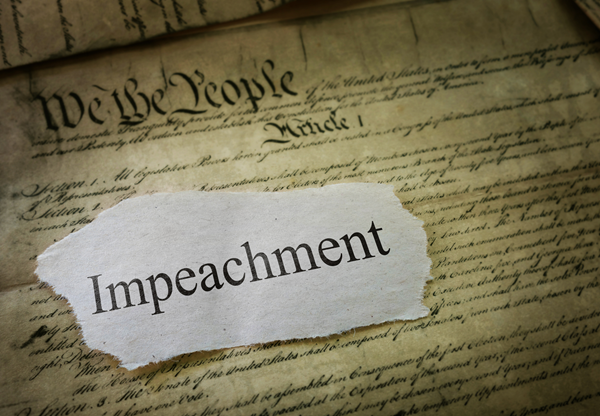 As per the US Federal law, the definition of impeachable crimes only included corruption, misconduct, or negligence of duty.  Later, it was expanded to include betrayal to the nation, accepting or giving bribes, and being a chain link for corrupt activities. If one goes by the actual wording, it is just 'treason, bribery, or other high crimes and misdemeanours.

The expression 'high crimes and misdemeanours are open to interpretation. It has been borrowed from the English laws, which only means crimes by public officials against the government. But in the case of the US, it may include a wide variety of matters that can be considered as an impeachable offence. It is thus a highly debated issue amongst lawyers and judiciary members whenever such cases crop up. Often it is concluded as an offence, which most of the House of Representatives consider being impeachment.

What is the general procedure of impeachment proceedings?

The process of impeachment differs in different countries while the procedure on a broader term remains the same. 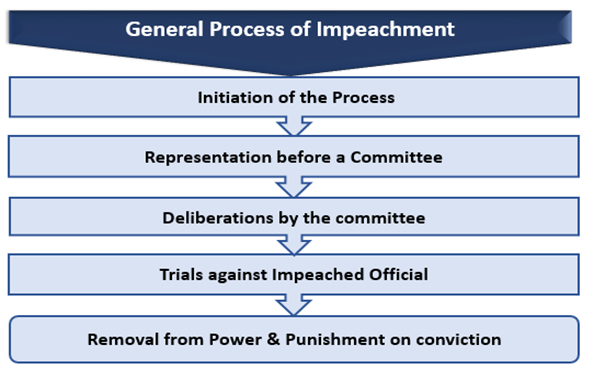 What are the penalties of impeachment and conviction? 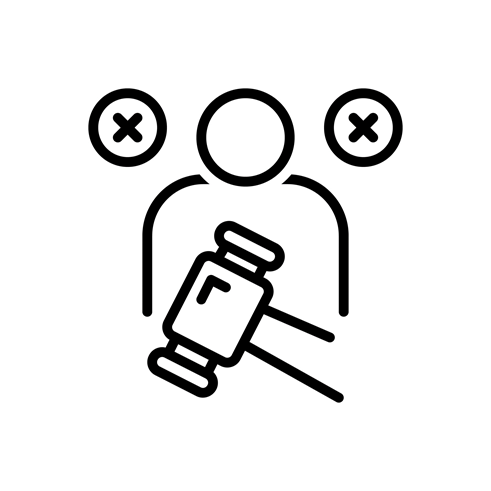 Impeachment, by nature, is just an accusation. It is not affirmative to charge any penalty. Once citizens come to know of impeachment charges on an executive, that individual's reputation is at stake. Impeachment to become a punitive offence requires proof and conviction of criminal charges after a proper trial.

Typically, consequences of Impeachment are-

What are some famous examples of impeachment?

Andrew Johnson- (1868) first US president with impeachment charges. He had attempted to remove the secretary of war. The House of Representatives in the US voted Impeachment against him.

Bill Clinton- (1998) was another president of the US who was charged with falsification and impeding justice in investigations of his bond with an intern at the White House. But in his case, most of the Senate denied perjury and obstruction of justice and president Clinton was proved innocent.

Donald Trump- (2019) House of Representatives impeached him for abusing his presidential powers to deal with the Ukrainian government, to investigate former US vice-president Joe Biden. A majority in the Senate acquitted him. Recently in January 2021, he was again charged for inciting a violent mob of his supporters to the US Capitol to interrupt a congress session regarding elections he lost. He was again proved innocent by the senators.

King Charles I- (1649) was impeached by the English Parliament for challenging the laws. He was guilty of attempting to raise an Irish army to pacify his enemies in England. Since kings could not be impeached, he was later sentenced to treason and punished with a public beheading.

Warren Hastings- (1795) was impeached by the House of Commons for corruption and mismanagement. He was charged for his actions in India. It was an instance where a retired official was impeached and had to face trials.

What is an ASX SPI Futures Contract?

25th Amendment Explained: What is it and How does it work?

ASX rebounds with BNPL and Healthcare pulling the chords

Trump becomes first US president to get impeached twice, Senate yet to vote