What is free trade area?

A group of countries that agree to remove tariffs and other import bans on each other's goods in exchange for each participating country applying its tariff schedule to imports from non-member nations.

Free trade zones foster global trade and the associated benefits and the international division of specialisation and labour.

On the other hand, Free trade zones have been chastised for both the expenses of expanding economic integration and for arbitrarily restricting free trade.

What are the most significant free trade zones across the world?

The AFTA was inked in Singapore in January 1992. Thailand, Indonesia, Brunei, the Philippines, Malaysia, and Singapore were the founding members. Cambodia, Vietnam, Myanmar, and Laos are the four countries that have joined later.

The bloc has virtually eliminated all import and export tariffs on goods traded between the countries. It has also reached agreements with several other countries, notably China, to remove taxes on almost 90% of imported goods.

Mexico, the United States, and Canada have had free trade agreements in place since January 1994. Although tariffs were not eliminated until 2008, the total trilateral merchandise trade exceeded US$ 1.12 trillion in 2014.

According to the US government, business with Mexico and Canada provides over 140,000 small and medium-sized enterprises in the US and over three million jobs. In Canada, job growth has been even faster, with 4.7 million new employments generated since 1993. It is also the leading exporter of goods to the United States.

COMESA, founded in December 1994, intends to develop human and natural resources to benefit the region's population. According to the United Nations, the primary goal is to create a vast economic and political entity to conquer trade restrictions.

The organisation is a significant marketplace, both inside Africa and abroad, with 19 member states and an annual export bill in addition to $80 billion.

COMESA's goal is to eliminate barriers to intra-regional trade, beginning with preferential tariffs and progressing toward a tariff-free common market and economic union.

However, MERCOSUR remains one of the world's most powerful economic blocs, significantly impacting the global economy and South American trade.

What is the meaning of a free trade agreement?

When two or more countries comply with the terms of their trade, this is known as a free trade agreement. They are in charge of determining the duties and tariffs that countries levy on exports and imports. Thus, all trade agreements have an impact on global trade.

Moreover, the Trans-Pacific Partnership (TPP) is on track to become the world's largest trade deal once wholly ratified. The TPP already encompasses 40% of global GDP, and commerce between member countries is substantial.

On the other hand, the deal aims to increase economic growth and strengthen financial connections by reducing tariffs and other trade barriers.

The Transatlantic Trade and Investment Partnership (TTIP) is a pact that the United States and the European Union actively negotiate. It would become the world's largest trade deal if it were to be reached, covering 45% of global GDP. It, like the TPP, intends to reduce import tariffs and regulatory hurdles.

What is the distinction between an FTA, a customs union, and a single market?

A free trade area aims to eliminate laws and taxes that apply to member countries that trade. Instead, members agree on a set of policies governing trade conditions, quotas, and tariffs.

Another feature of a free trade area is that imports outside the zone do not qualify for the agreement's benefits.

A customs union, like an FTA, lowers taxes among its participants and establishes a standard external tariff on exported and imported goods for non-members. The fundamental distinction between an FTA and a customs union is that an FTA transaction requires higher compliance.

Because it fosters frictionless trade, a single market is more comprehensive than a customs union. Any member understands that every product produced by the group's members is suitable for all members' distribution, sale, and usage.

A single market, in essence, offers a fair playing field for all members, encompassing not only marketable goods and services but also allowing individuals of any member country to work within the region freely. 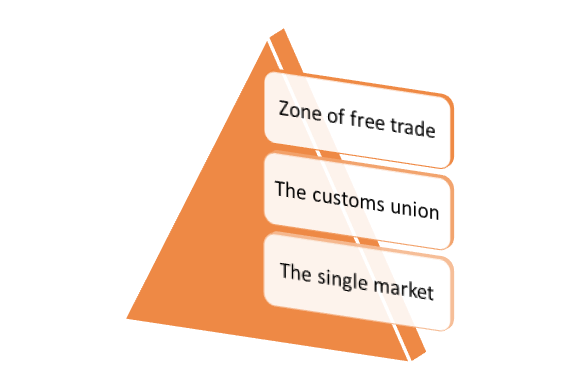 What are the benefits of establishing a free trade area?

What are the drawbacks of a free trade zone?