What is meant by a Free Trade Agreement?

The purpose of an FTA is to make trade between the participating countries easier and give preferential treatment to the participants in the agreement. Trade agreements of any kind go in line with the WTO’s policy of promoting free trade. They stand in stark contrast to protectionist trade policies like tariffs and quotas.

What types of Trade Agreements are there?

Trade agreements can be of the following types:

An example of a bilateral free trade agreement is the Canada-United States Free Trade Agreement, this has been succeeded by the North American Free Trade Agreement (NAFTA). The agreement was made with the intention of forming a free trade area with conditions of fair competition, incentivised cross-country investment, and efficient resolution to trade-related disputes.

What are the characteristics of a Free Trade Agreement?

A free trade agreement is beneficial because it involves the following characteristics for the countries participating in the agreement: 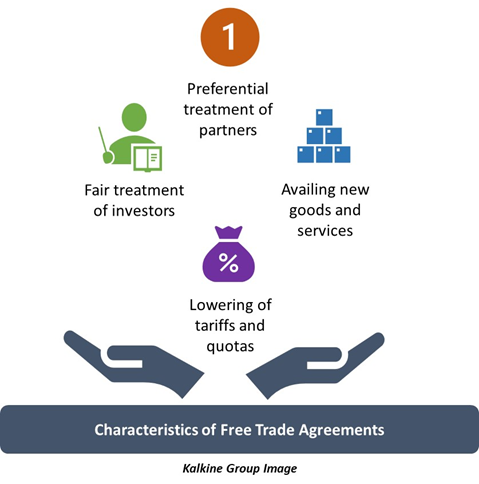 Why are free trade areas important?

What are the disadvantages of a Free Trade Area?