Every great trader/investor in the history of the markets had a specific method to approach the markets, which eventually led them to create a good fortune, Darvas Box system is one such method. It is a trend following strategy developed by Nicholas Darvas in the 1950s to identify stocks for good upside potential.

Who was Nicholas Darvas?

Nicholas Darvas was arguably one of the greatest stock traders/investors during 1950s – 1960s, but surprisingly he was a ball dancer by profession and not a professional stock trader. Even while trading and building his fortune, he was on a world tour for his performances in many countries and took up trading as a part-time job.

In November 1952 he was invited to a Toronto Nightclub for which he received an unusual proposition of getting paid in shares by the club owners.

At that time, all he knew was there is something called stocks which moves up and down in value, that’s it. He accepted the offer and received 6k shares of a Canadian mining company Brilund at 60 cents per share, with the condition that if the stock falls below this price within six months, then the owners would make up the difference.

This was the introduction of a professional ball dancer to the stock market.

Nicholas Darvas couldn’t perform at the club, so he bought those shares as a gesture. Within two months, Brilund touched $1.9, and his initial investment of $3000 turned to $11400, netting in almost three times of his investment. This triggered a curiosity into the stock markets, and he started to explore trading.

Origin of the Darvas Box theory

Initially, he was trading on his broker’s recommendation, tips from wealthy businessmen, he even approached some advisory services or any source that he could get his hands on for the tips, but all led him to losses.

After losing a lot of money, he decided to develop his own theory, and after a lot of trial and error, his observations and continuous refinements he eventually invented his theory “The Box Theory”.

So what exactly is the Box Theory?

As stated earlier, the box theory uses a judicious bend of both the technical and fundamentals. Darvas believed that in order to spot a good stock or even a multibagger, there should be something brewing up in the respective sector as a whole or some major fundamental change in that specific company.

Generally, the fundamentals that Darvas used to study were on a broader sector level, and not the company-specific fundamentals. Even for the specific company Darvas used to look from a general perspective like, is the company launching a new product which could be a blockbuster hit. He completely refrained from looking at numbers and financial statements as his initial experiment with ratios and financial statements didn’t yield any good result.

To know more on the three financial statements read:

Darvas was a big believer in price action and volume of the stock. He believed if some major fundamental changes were to take place in a company, this soon shows up in the stock price and its volume of trading as more people get interested in buying or selling the stock.

With his observations here realized by just observing the price action, he can participate in the rally which gets triggered by some major fundamental development without actually knowing about the change.

Using the box theory, Darvas used to scan stocks based on rising volume as he needed mass participation in the rally.

Also, he only picked up those stocks that were already rising. His theory is all about “buy high, sell higher” instead of the conventional belief of “buy low, sell high”. After the stock satisfies both the parameters of increasing price and volume with major underlying fundamental change, Darvas looks to enter the stock.

How and where to enter?

Major part of the box theory is based on entry and exit levels. To enter a stock, Darvas looked for a consolidation phase preceded by a rally. A consolidation phase is the price action wherein the price moves up and down in a tight range, that is, a non-directional move. He would then mark the high and low of the consolidation phase with the horizontal line, essentially making it a box-like structure, hence the name “Box Theory”. 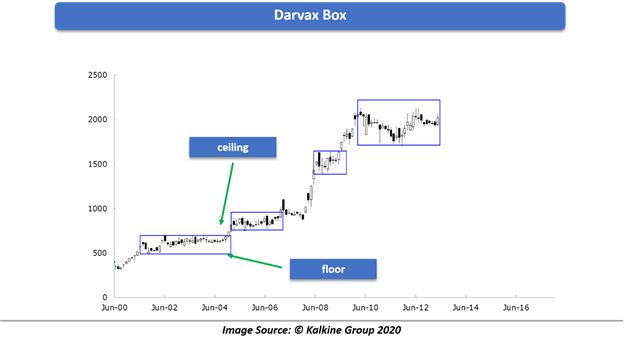 Darvas discovered early on, in order to become successful in the market your winning bets should yield much more profit than the loss in the losing bets. This led him to do pyramiding in his winning trade, which is clearly defined in the box theory.

Pyramiding means to increase the existing position if the stock is going in the favour, which leads to a much higher profit in the winning trades. According to the box theory, the repetition of the entry criterion is the new signal for adding onto the existing position.

In other words, after a position, if the stocks stage the same setup, that is, a consolidation after a rally, then the break above the ceiling of this new box would signal to increase position with the revised stop loss of 1 tick below the new floor.

In any case, whenever the stock falls below the current floor, the entire position would we sold off at once. This is the only exit condition in the box theory, and there is no method of booking profit upfront as Darvas believed in holding on to a rising stock. The only way to book profit is to let the stock to take out the revised stop loss.

IPO Wrap: a closer look at Afterpay, GreenTech Metals and My Foodie Box

How are 5 NZX stocks under NZ$5 faring?

My Foodie Box (ASX:MBX) makes a strong debut on ASX