What is Bullish Harami?

A bullish harami is a candlestick reversal pattern that appears at the bottom of a downtrend in an asset price. A bearish candle with a long body precedes a bullish candle with a small body- the latter encompassed within the body of the preceding candle. 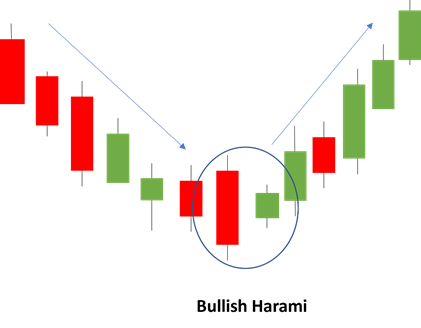 What is the Japanese candlestick?

A Japanese candlestick chart is a form of a chart that shows the open and close prices of an asset in the market using a rectangular body. It measures the price performance within a given time interval. It is named after the rectangular shape represented in the chart, which resembles a candle with wicks, projecting from the top and bottom.

Individual candlesticks build patterns over time, which traders can use to identify critical support and resistance levels. The patterns can also reveal buying pressures and selling pressures.

The bullish candle has three parts- 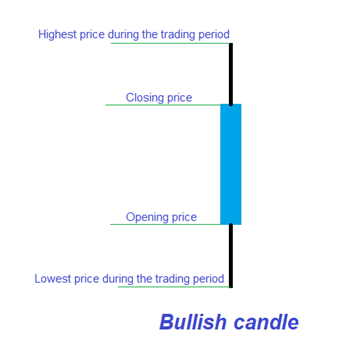 In the case of a bearish candle, the three parts are- 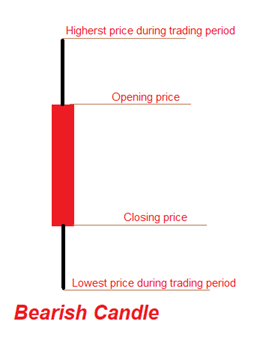 A candlestick is a visual representation of information regarding the price movement of an asset.

Candlestick chart analysis are one of the most popular types of technical analysis because they allow traders to evaluate price data using only a few price bars quickly.

What is the Harami candle pattern?

Harami is a Japanese word used for pregnant. The harami pattern of the candlestick chart is a combination of two candles evolving over two periods say P1 and P2. The first one is long while the second is small. The colours of the two bars are opposite. When a harami pattern appears, it implies the reversal of the trend i.e. from upward to downwards or downwards to upwards. The former is called bearish harami, while the latter is known as bullish harami. A long trade is usually initiated after P2.

How does the bullish harami pattern work?

We can try to understand the harami pattern taking the example of a month-long trading period. Initially, the market is on a downward spree due to which prices crash lower and lower, making the markets bearish. For instance, assume on the twentieth day of the month under observation, a new low is formed- the opening price is US$6, and the closing price is US$3 leading to the formation of a red candle. The next day opens at US$4 and closes at US$5 (less than the opening price for the previous day), thus forming a blue candle. The small blue candle appears like a foetus within the last day's red- this justifies the Japanese term harami. The blue candle, which suddenly appears after a red trail  when it is not expected, triggers the weakening of the bearish trends and becomes a boost for the bulls  to make an attempt. This trend will push the prices higher. At this point, the risk-taking traders must decide to go long on the stock at the closing price of US$5.

On the other hand, the risk-averse traders could wait for another trading day and go long once they confirm that a blue candle is formed. After initiating, the trader can wait to hit the target maintaining a stop loss. The trader should set the stoploss trade at the lowest of the prices between P1 and P2. 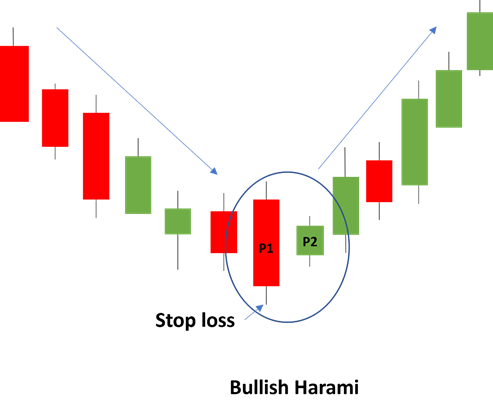 The trend explained above is bullish harami if a prominent and visible downswing precedes it in prices indicated by multiple red candles over various days.

What are the other bullish candlestick patterns?

Some of the other bullish candlestick chart patterns are as follows- 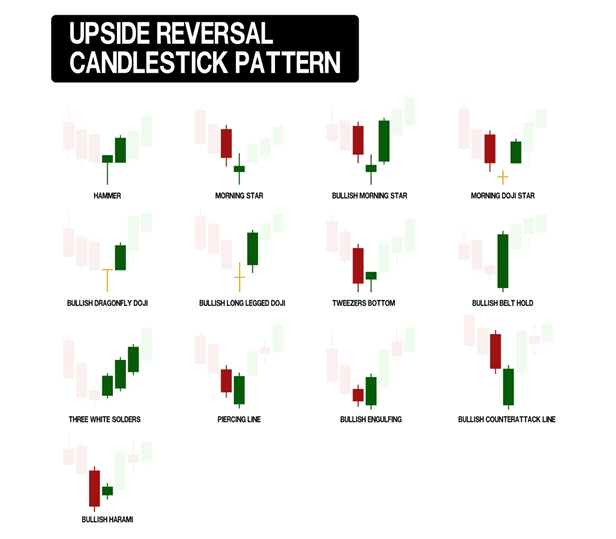 How are BHP shares faring on ASX?

ASX 50 stocks to watch out for

What is market capitulation and has it hit the crypto market?

How did top ASX-listed lithium stocks perform in August?

6 TSX stocks to watch as Canada’s GDP climbs 0.1% in June