A baby bond is a small denomination bond that has a face value of less than US$1,000. These bonds are intended to attract ordinary investors who may not have excessive amounts to invest in traditional bonds. Business houses issue baby bonds as corporate bonds. These bonds are sold mainly by municipalities, counties, and states to fund expensive infrastructure projects and capital expenditures.

Baby bonds can also be defined as a government policy, wherein every child receives at birth a publicly funded trust account, primarily with more generous funding for lower-income families.

Baby bonds are classified as unsecured bonds because neither the issuer nor the borrower pledges any collateral to guarantee interest payments and principal repayments in the event of default.

What is the relationship between change in interest rates and the price of baby bonds?

What are the advantages and disadvantages of Baby Bonds? 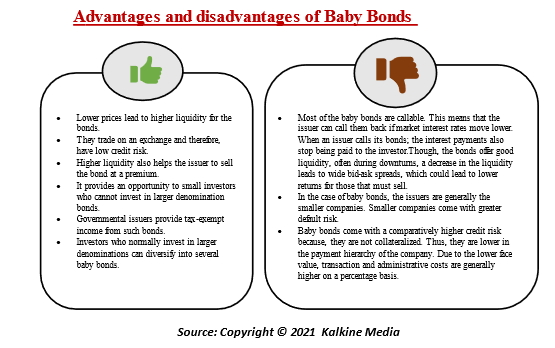 What is the recent development concerning “baby bonds” in the US?

Congressional Democrats reintroduced a bill in February 2021 to establish US$1,000 ‘baby bonds’ for every American when they are born. The bill was about setting up savings accounts that people cannot touch before they are 18. This was one of several proposals introduced to address growing income inequality and expand the federal government’s child benefits. Under the said bill, anyone born after 31 December 2021 will have “American Opportunity Account” run by the govt with US$1,000 set up for them.

The first Baby Bonds commenced in the US in the year 1935. Years later, a one-time US$5,000 baby bond plan was introduced by former US presidential candidate Hillary Clinton during the 2008 Democratic Party presidential primary elections. However, this plan was later removed from her platform.

Researchers studying the baby bonds suggest that the policy would result in wealth distribution to “a more egalitarian position, at least relative to human history.” 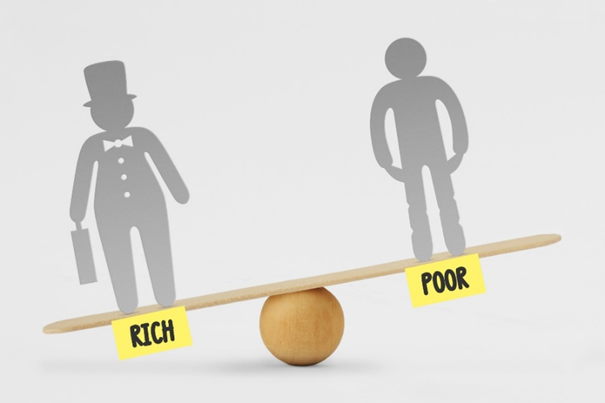 Columbia University researchers believe that a baby bond program would not entirely upend the unequal distribution of wealth in America. The top 10% would still own much more than the bottom 90%. It is believed that by raising the lower and median net worth's of Americans, the baby bond initiative could marginally consolidate more wealth in the middle.

What are the types of Baby Bonds one must avoid?

Shipping companies are usually known for being inefficient, over-leveraged, and not very profitable. Several companies in the industry function with losses and are forced to fund activities through debt offerings. Credit Suisse Global Investment Returns Yearbook has rated it as one of the worst-performing stock market sectors of the last 100 years.

How to buy baby bonds?

In the US, baby bonds are also referred to as Saving Bonds.

At present, the two types of saving bonds offered by the US Department of the Treasury are: Series EE bonds and Series I bonds. Series EE bonds are characterized by a fixed interest rate paid during the life of the bond and are guaranteed to at least double in value in two decades. Series I bond earn interest based on the rate of inflation. The Treasury regulates the I bond earnings rate twice a year.

After 2012, savings bonds have been sold only in e-Forms. This means that these bonds can be purchased through an account set up on the TreasuryDirect.gov website. A Treasury Direct account must be linked to a bank checking or savings account, and that account is generally considered the source for money used to buy any savings bonds an investor wants to purchase. Linking savings bond purchases to a bank account avoids the need to pay cash, write a check, or use a credit card to buy bonds.

TSX up with all sectors in green, DND spikes 67% in 4 days & loonie up