Which TSX energy stocks to buy as oil hits highest price since 2014?

Oil prices surged to their highest level since November 2014 in the US as a panel led by the Organization of the Petroleum Exporting Countries (OPEC) suggested slowly increasing energy supply to combat the ongoing shortage.

The latest rise in oil prices saw some Toronto Stock Exchange-listed energy stocks note a spike in investor interest. Let’s take a closer look at them.

Stocks of the Canadian oil and gas company shot up by as much as seven per cent on Monday morning (10.50AM EST), where it was trading at a value of C$ 3.84 apiece.

Baytex is currently trending high among the most active stocks and the top energy companies on the TSX. It holds a market cap of C$ 2.16 billion and a 10-day average trading volume of nearly eight million. 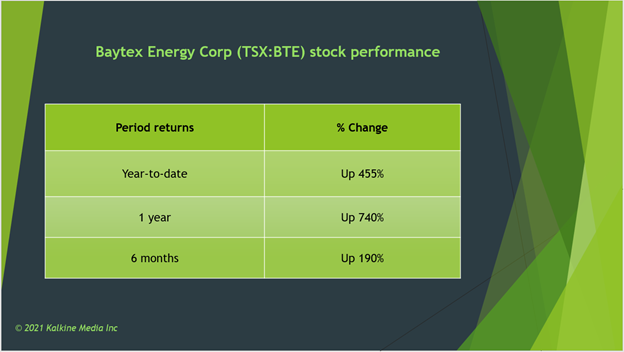 Suncor is also presently ranked high among TSX’s highly active stocks and energy stocks, with a market cap of more than C$ 40 billion and an average trading volume of 11.1 million in the past month.

The Calgary, Canada-based oil giant’s stocks skyrocketed by nearly 80 per cent in the past one year, while it expanded by about 29 per cent YTD.

Rising commodity prices paired with the energy supply shortage have been affecting investor sentiments lately. On Monday morning, December futures on the S&P/TSX composite index dipped by about 0.2 per cent at 7AM EST.

US crude futures, on the other hand, were up by about 3.3 per cent on Monday.

Before closing on Friday, October 1, the S&P/TSX Capped Energy had noted a growth of 0.52 per cent.