That’s a wrap for the Big Six banks’ earnings season for fiscal 2021!

Bank of Montreal (TSX:BMO) ended the season on Friday, December 3, joining its peers in the Big Six group to post increased profit as well as dividend payout.

Let’s a look at how the Montreal-based lender fared in fiscal 2021 and its fourth quarter.

The Big Six bank continued its recovery from the pandemic lows as its provision for credit losses (PCL) amounted to C$ 126 million in the latest quarter, as against a PCL of C$ 70 million Q3 FY21. 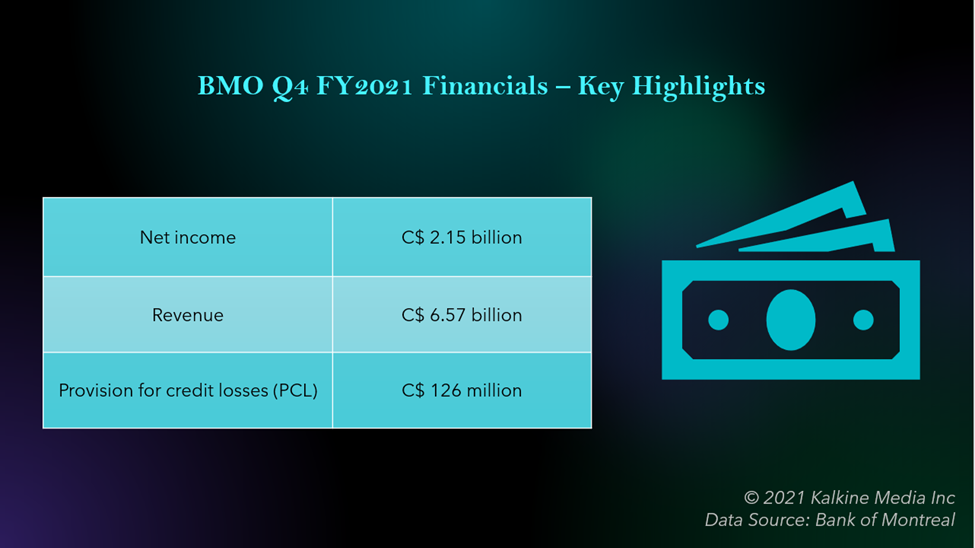 Now free to buy back shares and hike dividends, Bank of Montreal  has announced a 25 per cent boost to its quarterly dividend.

The Canadian lender added that it plans to buy back up to 22.5 million of its shares.

A day before the release of its latest earnings report, BMO stocks shot up by about two per cent to close at a value of C$ 134.81 apiece on Thursday, December 2.

Although the bank stock has fallen by about two per cent this week amid the string of earnings releases from top Canadian banks, it has galloped by over 39 per cent year-to-date (YTD).

The bluechip scrip holds a market cap of about C$ 87 billion, while its price-to-earnings (P/E) ratio stands at 12.4.

Market experts had predicted an interesting earnings season for the Big Six Canadian banks after the Office of the Superintendent of Financial Institutions (OSFI) greenlit share buybacks and dividend expansions for banks in November.

However, investors fear that the emergence and spread of the omicron variant could hamper the performance of the Canadian economy and its banks in the coming months.