Core retail sales in Canada grew by nearly three times at 1.1 per cent in September against 0.4 per cent in August 2020, Statistics Canada reported. The retail figures amounted to C$ 53.9 billion due to higher sales at general merchandise and eatery stores, an increase of 1.8 per cent in three months.

As per the StatCan’s September Retail Trade Survey, released on November 20, there was a 0.9 per cent increase in sales at food and beverage stores for the second consecutive month, led by higher rates for meat, fish, and dairy products.

As Canadian retail sales sustained to improve in September, pacing up to 1.1 per cent month-on-month, let us look at the following large-cap retail stock from the Toronto Stock Exchange (TSX): Dollarama Inc. (TSX: DOL) and Metro Inc (TSX: MRU). We will do a detailed analysis of these stocks and look at their financial performance.

The discount retail store is currently valued at C$ 15.77 billion. Its stocks surged by 1.42 per cent in a day on the back of Statistics Canada’s Monthly Retail Survey Report. The stocks are up over 15 per cent in the last six months. The grocery stock has soared by nearly 13 per cent year-to-date (YTD). Dollarama stocks have rebounded over 43 per cent since the coronavirus pandemic led market crash on March 24.

Dollarama is expected to release its third-quarter earnings of fiscal 2021 on December 9.

The company continued to carefully resume its operations with all required precautions against the ongoing COVID-19 pandemic. Dollarama has introduced more initiatives for both online and in-store shopping. 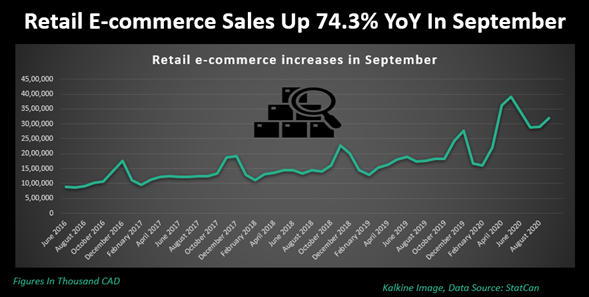 Metro Inc is one of the leading grocery retailers in Canada. Following its acquisition of the Jean Coutu Group in 2018, it expanded into the pharmacy sector. It operates an array of businesses, but most frequently works as either a retailer, managing individual stores, or a franchisor, licensing its patents and delivering merchandise to franchisees.

The retail franchisor is currently valued at C$ 15.19 billion. Its stocks traded in the green on the back of Statistics Canada’s Monthly Retail Survey Report. The stock has increased by over 7 per cent in the last six months. The retail stock has surged by nearly 12.5 per cent year-to-date (YTD). Metro stocks have recovered over 20 per cent since March lows.

Invest in US Equities for Global Exposure

Investing in US equities is a great way to secure capital appreciation. Though opinions are divided around US equity investment in these volatile times, however it is important to note that the Nasdaq Composite Index has rocketed up 6,162 per cent since its inception.

The US stock market is home to some of the fastest growing and futuristic companies in the world. It is a market that has matured with time and outstripped other global equities, generating high returns to investors. Even in the wake of coronavirus pandemic, US equities continue to be resilient.

For investors looking to enter the dominating US equities landscape, the timing has never been better. This market is poised to outpace its peers in the next decade.

And against this backdrop, Kalkine presents an exclusive US equity report that will help you build a high-growth stock portfolio.

From quantitative analysis to market risk predictions, we have used a thorough stock selection process spanning the entire spectrum of US capital markets.