Canopy Growth (TSX:WEED) is rising. Is the pot stock a safe bet?

Stocks of Canopy Growth Corporation (TSX:WEED) surged by about two per cent at market open on Tuesday, September 7, despite the lack of any official announcement from the company.

At the time of writing this, over 228,000 WEED shares had traded hands at the Toronto Stock Exchange (TSX) as investors turned their focus towards this cannabis stock.

Canopy Growth, known to be a major cannabis producer in the Canadian market, has noted quite a fall in its stock performance in the past few months. Despite a boom in cannabis sales during the COVID-19 pandemic, the stock appears to have failed to capitalize on the trend and attract investors.

On February 10 this year, WEED stock clocked a 52-week high of C$ 71.6 per share. Since then, its prices have dropped significantly.

Let's take a closer look at the fundamentals and stock performance of the company.

Canopy Growth released its financial results for the first quarter of fiscal 2022 last month, which displayed a robust performance in comparison to the same quarter of the previous year.

However, WEED stock has declined by 31 per cent year-to-date (YTD). It has secured a slight growth of two per cent in the last twelve months.

According to Refinitiv data, the difference between its close and 30-day simple moving average is a negative 6.7 per cent. 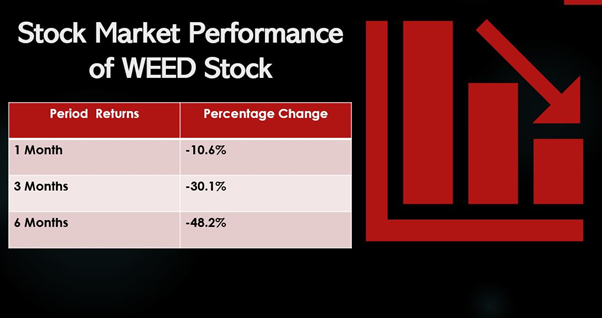 Cannabis is expected to be legalized at the federal level in the US soon. Keeping this in mind, Canopy Growth seems to be better positioned in the market if and when this change happens.

The Ontario-based cannabis producer has the support of strong partners like Acreage Holdings and Constellation Brands in the US and the company could become more profitable in future as it has already shown growth in the first quarter of fiscal 2022.