British American Tobacco (LON: BATS) would be acquiring a 20 per cent stake in the Canadian cannabis manufacturer Organigram. BAT, which is planning to invest in CBD, would have to pay about £126 million for the acquisition.

As part of the deal, one of BAT’s subsidiaries would be acquiring a 19.9 per cent stake in Organigram and would become its largest equity shareholder. It would give BAT the authority to nominate two directors to the Cannabis maker’s board and have representation in the investment committee.

Also read: How to invest in the booming cannabis sector?

Both the companies would be collaborating on product development and would set up a Center of Excellence where better and more advanced cannabis products would be developed. The focus initially would be on cannabidiol (CBD).

BAT said that the new collaboration would give the company access to high-quality R&D technologies, innovation in product, and cannabis expertise, which would complement the company’s plant-based competence and development skills. The shares of British American Tobacco were trading at GBX 2,624.50, down by 0.21 per cent on 12 March at 09:50 GMT + 1.

Apart from the tobacco industry, pharmaceutical firms are increasingly recognising the potential of the medicinal cannabis sector. The UK is the world’s largest exporter of legal cannabis, but recreational cannabis is still banned in the country. Since 2018, doctors have been allowed to prescribe medicinal cannabis. 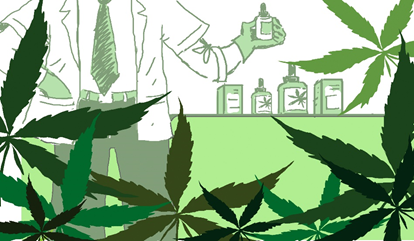 As interest around the sector grows, a look at some of the listed cannabis stocks on the London Stock Exchange:

It is one of the first medical cannabis developers that got listed on the London market. It is also listed on the Australian market. It has a market capitalisation of £103.15 million. It posted a 58 per cent drop in its revenue from ordinary activities to $741,911 for the period ended 31 December 2020, from $1.8 million for the same period a year ago. The company posted a net profit of $5.9 million, reporting a drop of 50 per cent from $11.8 million in FY2019.

For the period ended 30 September 2020, the company’s losses reduced to £1.13 million against a loss of £4.04 million in the same period a year ago. The company also said that in the period, the online only sales from CBD was £54,000, and more roll out was expected to begin post the period.

Zoetic CEO Trevor Taylor said the period ended 30 September 2020 was important for the company as it transitioned to concentrate only on CBD, and as it was mainly online sales, the income was not significant. After that period, the company benefitted from the AATAC distribution agreement.

On 9 March, the company announced that it has got into an agreement with PharmaCann Polska. Under the terms of the deal, PharmaCann would have to supply cartridges that would have Kanabo's medicinal cannabis formulations for PharmaCann’s VapePod device for inhalation. The cartridges would be manufactured and filled PharmaCann’s facility in North Macedonia.

Also read: Medicinal cannabis industry in NZ is set to boom despite hurdles

According to Sunrise Resources, the demand for horticulture perlite in the US has increased due to the boom in cannabis cultivation in the US and Canada. As the US mines are less perlite than required, it must make up for the gap by importing it from Greece. The company is expected to benefit from the deficit.

The company has made progress in the CS Pozzolan-Perlite project, which is used in cement and construction. It hopes that it will be able to supply enough horticultural-grade perlite necessary for cannabis cultivators in the US.