Canadian cannabis stocks, including those of Aurora Cannabis (TSX: ACB), Canopy Growth (TSX: CGC) and Aphria Inc (TSX: APHA), rode high in the markets this week. The rally comes just as the anticipation around the US presidential election results pumps up.

The discussion of federal legalization of adult-use recreational cannabis in the United States has been a hot topic during election campaigns this time. Former presidential candidate Bernie Sanders had declared that he would greenlight pot decriminalization at the federal level on his first day as president. Democrat vice presidential candidate Kamala Harris made the same promise a few weeks ago if Joe Biden won the Oval Office. To many peoples’ surprise, even some Republican politicians vouched for the legalization, such as Vermont Governor Phil Scott, who has hinted at allowing recreational marijuana in his state.

Despite rising demand and sales of cannabis, the S&P TSX cannabis index records a decline of over 40 per cent this year. However, the index has managed to climb over 17 per cent quarter-to-date (QTD).

Let’s take a closer look at the stocks of Aurora Cannabis, Canopy Growth and Aphria Inc to understand their performances better. 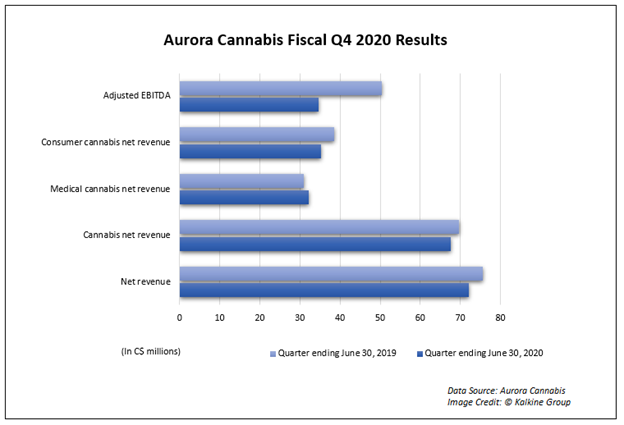 Shares of Aphria Inc spiked over 11 per cent on Monday ahead of the US election results. However, the stocks remain over five per cent down this year. Its scrips climbed over 34 per cent in the last six months and has been trading flat in the last three months.

Ranked high among trending health care stocks and stocks with heavy trading actives on the TSX, Aphria scrips recorded an average share trading volume of 3.4 million in the last 30 days.

Cannabis company Canopy Growth registered a 22 per cent YoY climb in its net revenue in Q1 2021, which the company said was driven up increased medical cannabis sales in Canada and Germany. It also incurred a net loss of C$ 128 million in Q1 2021 ending 30 June 2020.

Canopy Growth stocks jumped nearly 11 per cent during Monday’s intraday trading. Though the scrips are down nearly two per cent this year, they climbed about 29 per cent in the last six months and over 13 per cent in three months.

Shares of Canopy Growth are currently ranked high among trending stocks on the TSX, with a 10-day average trading volume of 1.75 million.