Amid resurgence in the Delta variant cases and the announcement of Canada’s snap federal elections, the S&P/TSX Composite Index dipped 0.17% or 34.65 points to close at 20,483.43 on Monday.

The weakness in the broader indices was mainly on account of the steep plunge in the energy and base metal sectors, which declined by 2.3% and 2.13%, respectively. The losses were partially offset on the back of strength in the financials, utilities, IT and telecom sectors.

Nevada Copper Corp., Enbridge Inc and Manulife Financial Corporation were among the most actively traded stocks on the Toronto Stock Exchange on Monday, with daily traded volumes of 19.23 million, 13.42 million and 9.45 million, respectively. 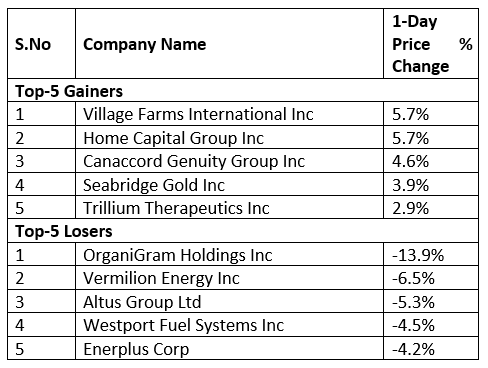 After being under pressure early in the session, US indexes were neutral throughout the trading day on Monday, despite the turbulence in Afghanistan.

The Dow and S&P 500 both rebounded to conclude the day at fresh all-time highs, while the Nasdaq gained ground but ended the day in the red.

The US Dollar index was up against the basket of major currencies on Monday and ended in green at 92.62, up 0.09%.