The telecommunication industry has been able to weather COVID-19 pandemic storm better than many. With limited opportunity to meet or socialise with people during the lockdown, the interaction between the populations has been mostly dependent on telecom industry, whether calls were made through online or sim. The continuous business performance has been reflected in several small-cap or mid-cap telco stocks with many of them faring better than the ASX200.

Let’s deep dive to understand the growth behind the amaysim’s share price leap.

Launched in 2010, amaysim is operating as an asset light subscription utility provider and intends to provide the best mobile and energy plans to its customers. The Company claims to be Australia’s fourth largest mobile service provider catering to more than one million subscribers.

The Company recently hit its 52-week high on 21 August at A$0.750 but closed the day at A$0.725. The price rally was experienced two days after the Company announced that the Management was expecting to publish a good set of results that too as per the prior guidance.

The Company also announced that the FY2020 results that were scheduled to be released on 24 August 2020 will now be published seven days later on 31 August 2020.

On 3 June 2020, amaysim Australia Limited communicated its intention to acquire ~77,000 mobile subscribers from OVO Mobile (or My Mobile Data Pty Ltd), a mobile virtual network operator for a consideration of A$15.8 million.

The acquisition of OVO customers is in line with the Company’s strategy to grow its mobile subscriber base both organically and inorganically, with a prime focus on increasing annual recurring revenue. 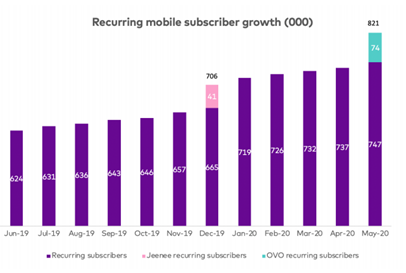 Funding for the OVO customer Acquisition

amaysim has secured commitments through increasing its debt facility by $6 million from its banking syndicate to back the acquisition. The increase in debt facility came after a $14 million Senior Debt Facility C was increased in December 2019 that was utilised to fund the Jeenee acquisition and potential future acquisitions, maturing in March 2023.

On 3 June 2020, the Company reiterated to close its FY2020 underlying EBITDA guidance in the range of A$33–A$39 million, as communicated earlier. The guidance is backed by an organic growth of the mobile subscriber base that has continued along with the inorganic acquisition such as Jeenee and OVO subscribers.

amaysium recorded a 15.4% decline YoY to A$22.34 as ARPU (average revenue per subscriber) stemming from the recurring mobile subscribers base during the H1 FY20.

The decline was due to a competitive mobile environment in last two years, 2018 and 2019, with a rising trend towards plans with higher inclusions. Also, ARPU decreased to A$125.31 in energy sources mainly due to lower energy usage across the customer base.

Also read: amaysim Australia’s share price: the best bet for the day with a new vision in Energy Space