The glimmers of hope are on the horizon for Australian listed, Aspire Mining Limited (ASX: AKM) which appears to welcome lucrative prospects with the impressive Chinese recovery. The world’s second-largest economy kick-starting its business activities post COVID-19 relaxations has nurtured a fertile ground for raw material commodity exporters for continuing infrastructural growth with full force.

China’s Purchasing Manager’s Index (PMI) pinpointing the level of movements in the Chinese manufacturing sector is indicating expanding activity, with the official June PMI coming at 50.9. Steel production has skyrocketed to support the factory activities, signalling rising demand for the coking coal, which is a vital component in the steel making process.

Amidst the rise in the steel manufacturing prompting the demand for metallurgical coal, Aspire Mining’s Ovoot Coking Coke project situated in Mongolia appears to be well-positioned to tap the lucrative opportunities. The Company concerning the Ovoot Early development project has been engaged in receiving the necessary approvals to provide further infrastructure advantage to the project.

The rise in the economic activity, which grew by 3.2% in June Quarter, in China is indicative of growth in the coal demand required to sustain the progressive stance, catapulting opportunities for Ovoot project.

As the Company steadfastly advances its operations and activities for bolstering project development, let us explore the radiant opportunities fabricated by the flourishing Chinese manufacturing sector that add vast export potentials to the project.

Mongolian coal-rich resource has worked as the magic bullet for the country, stimulating economic boom and trade surplus. As per Montasame News Agency of Mongolia, Mongolian export is heavily reliant on China which in 2019 recorded 89.1% of the total country’s exports. Furthermore, Mongolia in 2019 recorded trade worth USD 8.9 billion with China, with total foreign trade turnover worth of 64.4%.

Notably, coal has remained as the primary contributor of Mongolian exports to China, accounting for 44% of its total exports. The country sharing its borders with China enjoys the locational advantage of assisting in an overall lowering of transportation cost and convenient movement of a large volume of coal to neighbouring China. Meanwhile, other coal exporting countries are present at a considerable distance, enhancing the favourability for Mongolia based coal mining projects.

Chinese State Councilor and Foreign Minister Wang Yi have indicated that China plans on deepening the economic and political ties with Mongolia, which can further propel growth for Mongolia-based coal projects. 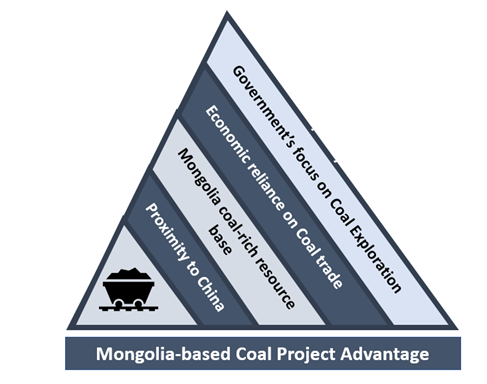 While the presence of coal has been a substantial factor aided by Mongolia’s proximity to China, which remains the major importer of coal, Aspire Mining is eyeing for further improvement in infrastructural facilities for convenient and cost-effective transportation of the coal.

OEDP incorporates open pit development of Ovoot Coking Coal Project along with trucking annually up to four million tonnes of washed coal through to the nearest railhead at Erdenet via a 560 kilometres special-purpose road.

The social welfare will be guaranteed by the road development, including

Aspire is eyeing early production of washed coking coal which could be further supported through the operational expansion following the construction of the Erdenet-to-Ovoot Railway, which Aspire’s subsidiary, Northern Railways LLC is currently progressing.

A one-and-a-half-year extension was granted to Northern Railways (by Governments National Development Agency) which has extended the rail concession for the Erdenet-to-Ovoot Railway to September 2021 from initially February 2020.

The Company for the preferred route received local approvals from the 13 soums that lies along the expected road path. However, five soums approval (in Khuvsgul) suffered hinderance owing to the requisite for further Khuvsgul airmag government approval.

Nevertheless, the company witnessed a substantial boost to its road development initiative as Khuvsgul airmag government incorporated ‘Mogoin Gol to Erdenet road alignment’ as a component of its Road Development Plan (2030).

Thereby, the project development now enjoys substantial engagement with the local community of soums which is anticipated to bolster the journey for final ministry approval.

The company eyeing the potential to reduce the starting road investment cost is evaluating a phased development plan for the road.

The involvement with communities and local soum government is pursued by the Company, which is focussed of obtaining required approvals for carrying out the definite Feasibility Study.

In regard to the DEIA, the company eyeing for Ministry of Environment approval intends to present management and mitigation plans for the purpose of OEDP approval process. Meanwhile, addressing International Finance Corporation ‘Equator Principles’ in its DEIA scope would smoothen dealings with various banks.