Copper and gold-focused explorer Cooper Metals Limited (ASX: CPM) has shared a critical update on the signing of a Binding Heads of Agreement (HOA) for the acquisition of an exploration tenement, EPM19125. Cooper will acquire the tenement from Ardmore Resources Pty Ltd. Shares of CPM traded at AU$$0.48 a share on 9 August 2022, zooming 5.5% higher against the previous close. 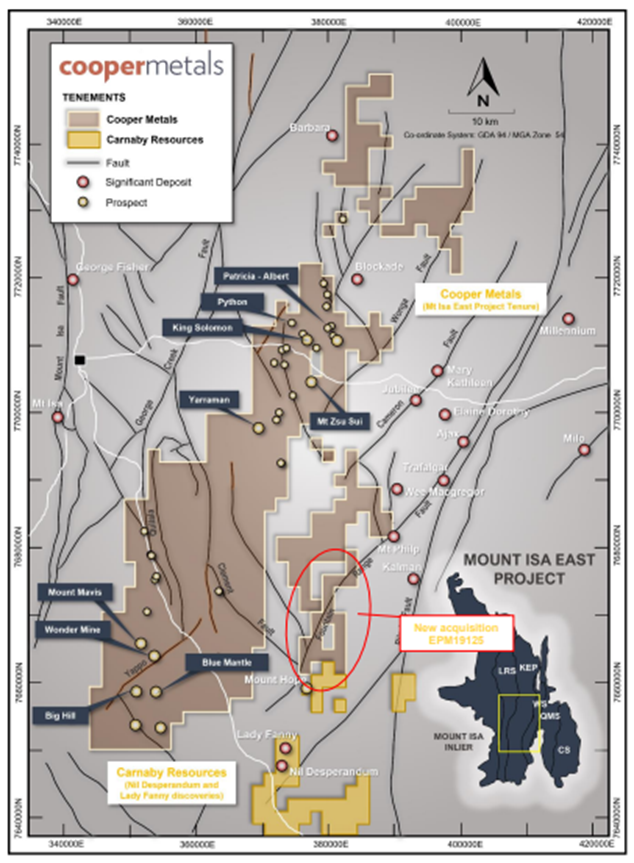 Under the agreement, Cooper will acquire 100% interest in EPM19125, which is located adjacent to the company’s tenement EPM27782. The tenement is located in the highly prospective Mary Kathleen Domain, a part of the Mt Isa Inlier, which is considered highly prospective for copper-gold mineralisation and hosts several deposits including Aeris Resources Ltd (ASX: AIS) Barbara Deposit and Carnaby Resources Ltd (ASX: CNB) Cu-Au discoveries at Nil Desperandum and Lady Fanny Prospects.

Historical exploration at EPM19125 has been restricted to only regional geochemical programs including rock chip sampling and stream sediment sampling. In the last decade, the previous tenement holder had undertaken an extensive airborne magnetic survey (100m line spacing) and limited rock chip sampling.

Within EPM19125, the GeoResGlobe database records two Cu-Au prospect, including an abandoned copper mine adjacent to the regional Fountain Range Fault. The mine is over 70m long, 3m wide, and 3m deep. The GeoResGlobe database includes over 35 historical rock chip samples with grades up to 5% Cu and 5 g/t Au on the eastern edge of the tenement.

Cooper is moving forward with the expansion of its ground position at the Mt Isa Inlier. Upon completion, Cooper will hold over 1,600km2 of tenure. The new tenement has substantial exposure to the highly prospective Fountain Range Fault, demonstrating large volumes of hydrothermal fluid flow, mineralisation and focuses of exploring area northeast of EPM19125 for large-tonnage copper deposits.

The new tenement includes zones that require immediate exploration follow-up including two historical copper mines and historical rock chip samples with grades up to 5% Cu and 5g/t Au. The tenement is perceived to be located along the strike from Carnaby’s interpreted IOCG corridor. Currently, Cooper is undertaking drilling at the King Solomon Cu-Au prospect.

Next steps on Cooper’s agenda: