Despite the current uncertainty in the market, many ASX-listed companies managed to surge on ASX. By the market closure on 17 August 2020, most of the indices closed in the red zone. A drop of 0.81% was seen on the benchmark index, S&P/ASX 200, which settled at 6,076.4.

The earnings season indicates how companies have performed over a period. The financial results can have a significant impact on the share price movement with a better-than-expected result likely to see the stock zoom.

In this article, we would look at three such companies which noted a surge in their share price today. Let us shed some light on their recent developments which helped the shares to rise on ASX.

Australia's largest specialty retailer of baby goods, Baby Bunting Group Limited reported growth of 5.542% in its share price by the end of day’s trade and settled at A$4.380. The shares have reached near its 52 weeks high price. The Company has a market cap of A$529.39 million and ~127.56 million outstanding shares.

Executing on its strategy for the future:

In FY2020, the Company updated its store network plan. It is now looking to continue to grow its network of stores to over 100 stores. Further, Baby Bunting expects to open four to eight new stores each year. Apart from that BBN’s destination format stores, regional stores and the shopping centre formats, the Company is also considering alternative store formats.

In executing the long-term network plan, Baby Bunting would select locations that fulfil its rigorous return on investment hurdles.

DO READ: Earnings Report: Stocks that Passed the Litmus Test and those that Didn’t

Harvey Norman Holdings shares have zoomed up by over 49% in the last three months, and by the end of the day’s trade, the shares settled at A$4.220, up 2.927% from the previous close. HVN has a market cap of A$5.11 billion and ~1.25 billion outstanding shares.

On 03 August 2020, HSC Technology Group Ltd (ASX:HSC) signed a reseller agreement with Harvey Norman Commercial Division NSW for its HSC Care and HSC Home solutions. The partnership is for three years with an option to expand for another two years.

As per the agreement, the solutions made by HSC Technology Group is widely accessible to Harvey Norman’s commercial clients which comprise of builders, developers, architects, and plumbers. There is also a possibility to expand HSC’s National Disability sector presence through existing Harvey Norman agreements.

Adacel Technologies Limited is the developer of advanced simulation and control systems for aviation and defence.

Adacel Technologies shares have soared significantly by nearly 36% on ASX in the last three months. After the release of Adacel’s FY2020 results, the shares skyrocketed on the ASX, and by the end of the trading session on 17 August 2020, the ADA share price stood at A$0.720, up 30.909% from its previous close. Adacel Technologies’ market cap was A$42.04 million and there were around 76.44 million outstanding shares.

Despite the impact of COVID-19, the Company delivered impressive financial results. 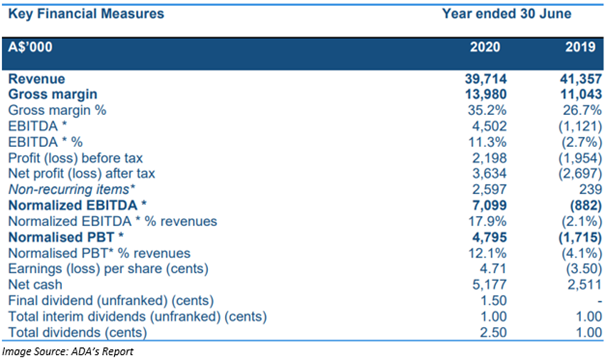 For FY2021, Adacel Technologies expects a profit before tax in the range A$6.3 million - A$6.8 million. Barring payment of future undeclared dividends, ADA is predicting cash of ~A$10 million at 30 June 2021.

The recent results and the encouraging future outlook presented by the three companies Baby Bunting, Harvey Norman and Adacel Technologies, seems to have laid a positive impression on the market players. The optimism, in turn, has led to a surge in the respective share prices on the ASX.