Starpharma Holdings Limited (ASX: SPL) is based out of Melbourne. The company has two primary development programs, which are VivaGel® portfolio and DEP® drug delivery. Besides this, it is developing various products internally and others through undertaking commercial partnerships.

On 24th May 2019, the company announced that its patented nanoparticle formulation, DEP® irinotecan had depicted notable efficacy and safety benefits to the extent that it had outperformed the cancer drugs irinotecan (Camptosar®) and cetuximab (Erbitux®). This was inferred from the irinotecan-refractory HT-29 human colon cancer model. The two cancer treatments had shown limited activity in the preclinical model.

The results support the fact that DEP® drugs perform better when they are used in combination, like with Erbitux® , rather than in the originator product, like when used with Camptosar® used in the same combination. However, the result is timely as the DEP® irinotecan phase 1/2 trial is expected to take place soon this year.

The company had previously depicted the benefits of using DEP® docetaxel, DEP® cabazitaxel and AZD0466 as part of a combined therapy approach. 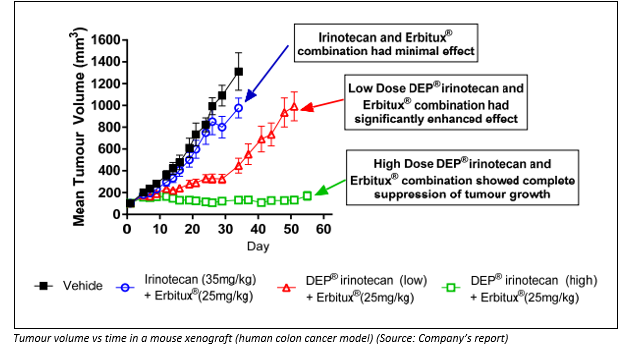 It showcased enhanced survival as well, even though DEP® irinotecan doses were low, approximately one third, and high dose, two-thirds of the maximum tolerated dose for this combination. 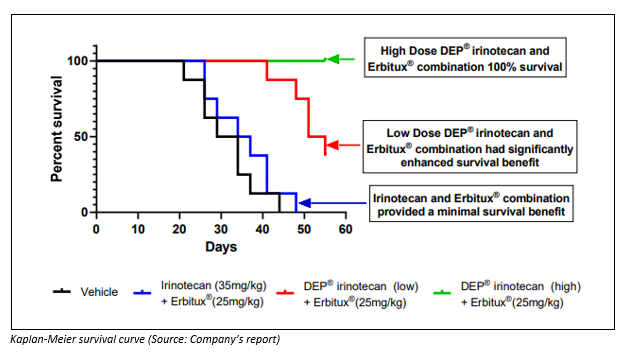 To conduct the study, the xenograft study used an HT-29 cell line. It was conducted by an internationally established translational cancer group for SPL. A xenograft process uses human cancer cells and inserts them in a mouse. It is a well-documented means of studying the effectiveness of anti-cancer treatments. The Tumour growth figures were analysed in GraphPad Prism for ANOVA which was followed by Dunnett’s post-hoc test. Kaplan-Meier survival curves were studied by using the Log-rank (Mantel-Cox) test.

Balb/c mice were inoculated subcutaneously with the colon cell line and dosed with saline DEP® irinotecan and Camptosar® once a week. Cetuximab IP was dosed twice a week.

Irinotecan (Camptosar®) is used as a part of first line therapy towards CRC treatment. CRC is amongst the most common cancers. In the US, being the third main cause of death by cancer, it affects more than a million individuals each year. Its sales in 2018 were US$1.1 billion. Erbitux® is used in almost 50% of CRC cases had recorded sales of US$1.6 billion in 2018. It is marketed by Eli Lilly and Merck KGaA.

Besides this, the company also received feedback by the FDA stating the important unmet medical need in bacterial vaginosis, and the potential for VivaGel® BV.