Food industry comprises of those businesses that are engaged in the production and supply of food across the world. Some of the industry segments are agriculture, manufacturing, food processing, food promotion, marketing, distribution, food processing, catering, grocery, education and food technology.

In this article, we will discuss two companies directly and indirectly serving the food industry, along with their recent updates and stock performance.

ROO has successfully harvested the world’s first table grapes grown only with irrigation from humidity in the air, according to a company announcement on 26 July 2019. The vines were planted at the Roots research & development hub in central Israel during May 2018 and were harvested in July 2019.

ROO used the Irrigation by Condensation (IBC) solar and/or electric system for the harvest irrigation. As of now, the solar and/or electric versions of the system have sustained nine crops such as grapes, avocado trees, beans and alfalfa. The IBC system, for which the company holds a patent, produces water from the condensation of humidity in the air. The system generated enough water, under the ‘deficit irrigation’ concept, enabling the plants to sustain for the entire year with the water that got condensed on the external surface of pipes. This is one of the major achievements for the company, reflecting its IBC system’s potential to address irrigation issues faced by small and medium farm holders across the globe, according to Roots Co-founder Boaz Wachtel, who invented the IBC technology. Boaz Wachtel stated that the technology would address the acute needs of farmers who seek clean water access for small and medium plot irrigation. 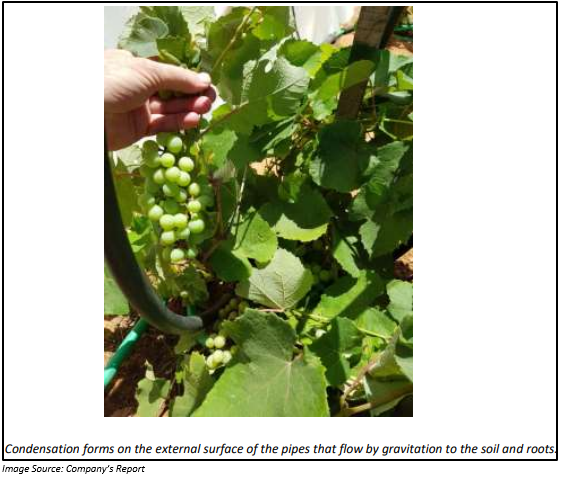 Electric and photovoltaic power sources were used, as part of the IBC installation for grapes. Using these sources, the system chilled and circulated a one-time fill-up water tank in a closed cycle. As a result, a stand-alone system was created, which helped in sustaining the grape crop growth cycle during the entire year.

Yowie Group Ltd (ASX: YOW) is a global brand licensing company, focusing on the development of consumer products that are designed to encourage learning, understanding as well as connection with the natural world through adventures. The company is also engaged in the supply of Yowie branded chocolate confectionery product.

On 26 July 2019, Yowie Group Ltd announced to have received a notice from Aurora Funds Management Limited, unveiling that Aurora has decided against proceeding with its scrip takeover bid for YOW. Aurora is the responsible entity for Aurora Dividend Income Trust.

The company has expressed its disagreement with the conclusion given by Aurora regarding the financial performance of YOW during Q4 FY2019. Aurora believes that the company performed below the previous guidance provided by its Board and Management for the concerned quarter. According to Aurora, the company has continued to rationalise its adverse performance despite a continuous increase in operating losses. Moreover, the company has no clear path towards making profits.

Aurora concluded that the company’s June 2019 quarter financial performance represents a Material Adverse Change, resulting in a defeating condition in the takeover bid. Meanwhile, the company welcomed Aurora’s decision not to go ahead with its extremely unattractive unlisted scrip takeover bid.

The company noted an improvement in EBITDA loss from USD 5.0 million in FY2018 to USD 2.3 million in FY2019. Its EBITDA loss of USD 1.2 million during the fourth quarter covered a significant increase in marketing expenses worth USD 0.7 million to roll out Yowie Bites and Wild Water Series 5, in addition to c. USD 0.2 million in legal expenses. YOW reported to be on track to deliver revenue growth in FY2020 based on positive EBITDA as well as positive cash flow run rate. 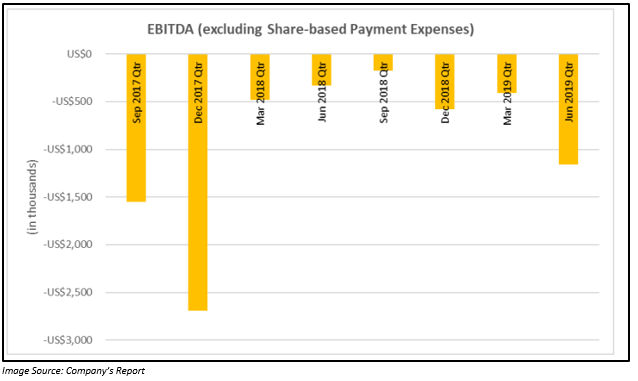 Net sales during the quarter were impacted by continued challenging market environments. As a result, net sales reached USD 3.3 million in the reported quarter, compared with USD 4.9 million in Q4 FY2018. FY2019 sales stood at USD 14.7 million, compared with USD 17.5 million in the year-ago period. Its cash receipts from customers reached USD 4.228 million and USD 15.259 million for the June 2019 quarter and FY2019, respectively. The company used USD 4.747 million on manufacturing and operating costs, which includes USD 0.7 million for launch marketing for Wild Water Series 5 and Bites. The net cash flow for the June 2019 quarter improved by 59%, reaching USD 0.621 million. 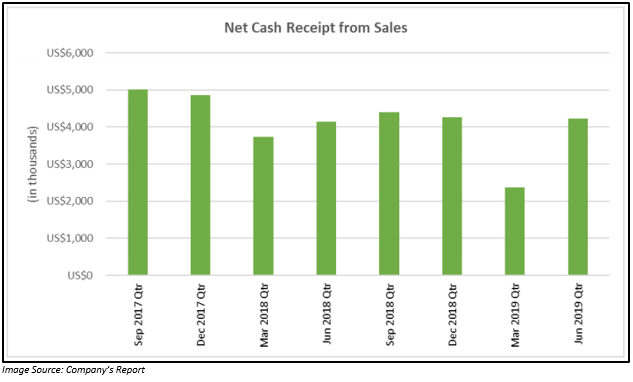