The Bankable Feasibility Study (BFS) confirmed the potential of the mine as a near-term, low-cost, copper and zinc development prospect. As per the company, post considering the study assumptions, the project demonstrates excellent financial returns with a modest capital investment.

The new production hub is located within an under-explored volcanic massive sulphide district, which is highly endowed with significant long-term exploration potential. The BFS conducted by the company underpinned the commercial viability of a mining plan for the 10-year foundation phase.

ORN aims to establish the platform for further mining of deposit extensions along with mine development and exploration of the neighbouring prospects in the foundation phase by establishing mine infrastructure and operational capacity.

The foundation phase, which runs for 10-years run-of-mine production with an ore processing rate of 2.4 million tonnes per annum, targets the portions of the prospect, which marked an upgrade during the first surface-based drilling campaign conducted by the company during 2017-2018.

The surface-based drilling upgraded a few portions of the prospect into inferred and indicated resources category, and the company plans to utilise the sources during the foundation phase. The production target underpins 65 per cent of probable ore reserves and 35 per cent of inferred mineral resources.

The production metrics demonstrated by BFS are as:

Financial Metrics of the BFS:

The projected cash flows of the prospect over the life-of-mine are as:

The BFS, which was conducted by independent consultants, evaluated the establishment of a new mining operation at the Prieska Copper Mine.

Resource Profile of the Prospect:

The further distribution of the total minerals at Repli along with other tenements is as:

However, the company updated the resources further across the tenements at the prospect, and the total mineral profile of the prospect is as:

To conduct the BFS and generate the financial metrics, the company assumed prices as:

Copper-US$6,834 per tonne, Zinc- US$2,756 per tonne, Silver- 17 per ounce, Gold- US$1,300 per ounce. The company previously confirmed an excellent mining potential at its another prospect.

With the imminent granting of mining rights, the company plans to complete optimisation of the BFS plan, advance project financing discussions and project implementation planning, and conclude agreements with concentrate off-take partners and key suppliers. According to ORN Managing Director and CEO, Errol Smart, the company is likely to make an FDI related to the project development in H219, with construction work expected to start in late-2019 or early 2020.

As GSM completed the initial geophysical review of the Yule project tenements, Managing Director of the company, Michael Moore, mentioned that the review not only recognised the project’s compelling geology, which was under-explored previously, but it also resulted in numerous high-quality targets for exploration during the current field season. 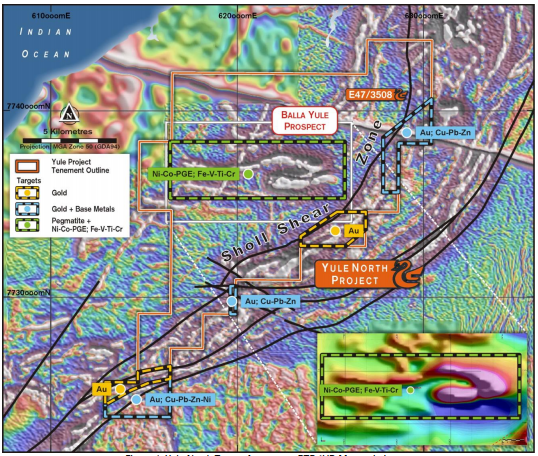 Michael Moore also stated that the company intends to drill test the identified base metal targets in the third or fourth quarter of the current year.

The geophysical review, which identified 17 new priority targets, assessed the regional structure, intrusive complex and stratigraphy in the Yule area, and as per the company, the targets are considered to be prospective for gold and rare metal pegmatite along with intrusive-related base and precious metal mineralisation.

GSM plans to further redefine six high priority targets across both Yule North and South tenements out of the 17 newly identified targets with follow-up ground-based SAM and electromagnetic surveys along with aircore drilling. 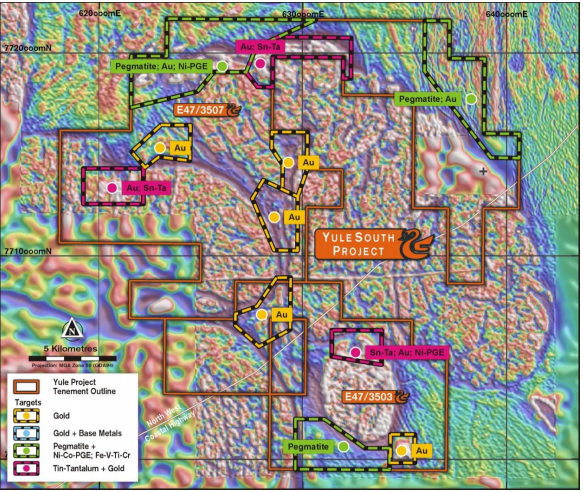 Of the six high priority targets, three targets would take precedence. These three targets will be undertaken for immediate refinement with ground-based geophysics.

GSM plans to undertake a moving loop electromagnetic survey at a previous drill intersection of 14 metres of 0.51 per cent nickel and 0.033 per cent cobalt from 38 metres along with petrographic analysis identified bedrock sulphide accumulations at the Balla Yule Prospect.

As per the company, numerous untested late-time electromagnetic anomalies were identified by historical electromagnetic data in the south-western part of the Yule-North. The company intends to re-evaluate these anomalies with a modern, high-powered MLEM survey.

Apart from Yule, GSM hosts and operates Cuddingwarra & Cue Gold Project, which is in the proven gold region, which has produced over 7 million ounces of gold over the past 126 years.

Another high prospect of the company is its Four Mile Well Project, which is near to the Laverton townsite.