How Is The Needle Moving Around Wesfarmers Attempt to Buy Lynas?

The share price of Australia’s rare-earths mining company, Lynas Corporation Limited (ASX: LYC) jumped on Friday following the permission by Malaysian Prime Minister, Mahathir Mohamad to continue operations of a processing plant in the country. The stock of Lynas rose 11.314 per cent, closing at AUD 3.050 on Friday. The share price was well above the Wesfarmers Limited's (ASX: WES) AUD 2.25 per share conditional cash offer made in March. 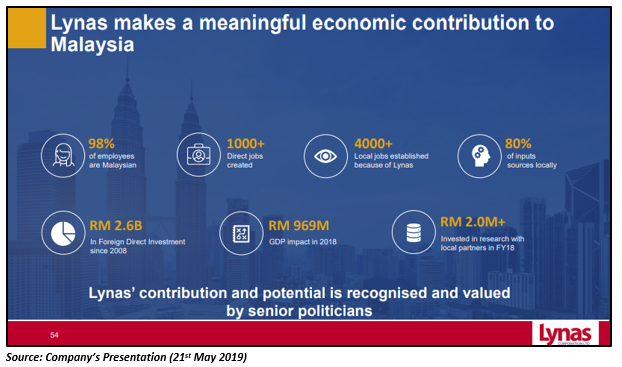 Apart from Mt Weld Concentration Plant in Western Australia, Lynas operates the Lynas Advanced Materials Plant (LAMP) in Kuantan, Malaysia. Its processing plant in Malaysia is under controversy for a long time due of the issues regarding the low-level radioactive waste created by its Malaysian plant. Following the Malaysian Prime Minister’s approval that resolved months of uncertainty, the improvement in its share price on Friday added AUD 206 million to Lynas' market cap in a session.

The market capitalisation of the company is now over AUD 2 billion, which is more than half a billion dollars above the Wesfarmers conditional offer of AUD 1.5 billion. In an announcement in March on the ASX, Wesfarmers made an Indicative Proposal to acquire Lynas for AUD 2.25 a share, payable in cash, pursuant to a scheme of arrangement.

A diversified corporation based in Australia, Wesfarmers, indicated in a statement on Friday that its proposal to acquire Lynas was still live. However, Wesfarmers also mentioned that it will consider its position when there is regulatory assurance around operating license of Lynas in Malaysia.

Market analysts anticipate Wesfarmers to stick with Lynas plan, continue keeping a close watch on the situation and be in it for the long haul.

Wesfarmers is also grabbing attention over its recent Scheme Implementation Deed (SID) with a lithium developer, Kidman Resources Limited (ASX: KDR). Wesfarmers has entered into a SID following its proposal to acquire all the shares of Kidman at AUD 1.90 cash per share via a scheme of arrangement.

Recently, Lynas released its investor presentation in which it highlighted that the high cost of electric vehicle segment would push the demand for rare earth metals in future. The company expects the demand for Rare Earth Electric Vehicle Drives to improve ahead, providing an opportunity to Lynas to expand further.

In February this year, both Lynas and Wesfarmers announced their half-year financial results for the half-year ending 31st December 2018. Let us have a look at the financial performance of these companies during the period:

In comparison to the prior corresponding period, the company reported a rise in its sales volume (up by 5 per cent), total REO production (advanced 9 per cent) and NdPr production (rose 5 per cent) to 9,428 tonnes, 9,642 tonnes and 2,802 tonnes, respectively.

Delivering a solid financial performance, the company announced a revenue of AUD 179.8 million, EBITDA of AUD 50.8 million and NPAT of AUD 19 million during the half-year period.

Wesfarmers reported a net profit after tax of AUD 4,538 million (includes post-tax significant items of AUD 3,059 million with regard to discontinued operations) in the half-year. The Net profit after tax of the company from continuing operations improved to AUD 1,080 million (up by 10.4 per cent). The Net financial debt of the company reduced to AUD 324 million (a fall of AUD 3,256 million below the balance at 30th June 2018) during the period.

Stock Performance of Lynas and Wesfarmers

The stock of both the companies closed the day’s trade lower on the Australian Securities Exchange (as on 3rd June 2019).