Commodities prices are once again trading under pressure after a phase of recovery over the speculation that improving activities in China would ultimately support the demand.

However, in the status quo, China is adopting some stringent policies to support the local demand and backlash against the global advocacy currently faced by red dragons related to the foundation and handling of the novel coronavirus.

While the United States now seems to be lacking interest related to the U.S-China trade deal (phase 1), inferred from recent statements made by the United States President Donald Trump, China is now backlashing against other trade partners such as Australia, which had been hit with an 80 per cent tariff hike on barley.

Apart from that, China had notified new inspection policies, which would allow customs to inspect the product on behalf of the importer for toxic and waste material, which though has been welcomed by the iron ore mining industry, but currently being speculated to further disturb the iron ore supply chain, which has already been under pressure for quite some time amid bad weather conditions in Brazil and due to the recent damage caused by the Tropical Cyclone Damien.

While the supply constrains coupled with robust demand for the commodity in China is supporting the price, other consumption-based commodities such as copper, lithium, nickel, crude oil are again under pressure over the market speculation that the recent Chinese trade spat would impact the demand. 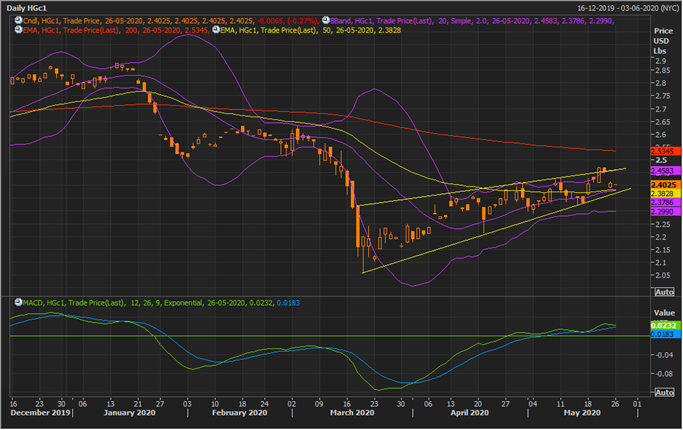 On following the daily chart, copper prices breached the upper resistance line of the upward sloping channel; however, failed to sustain and retracted back. The upper line of the resistance level and the +1 Standard Deviation of the 20-day simple Bollinger band are overlapping, suggesting that it would act a primary and decisive resistance level.

Investors should monitor the commodity closely as a break and price holding above or below the current channel with decent volume would decide further price action in it. 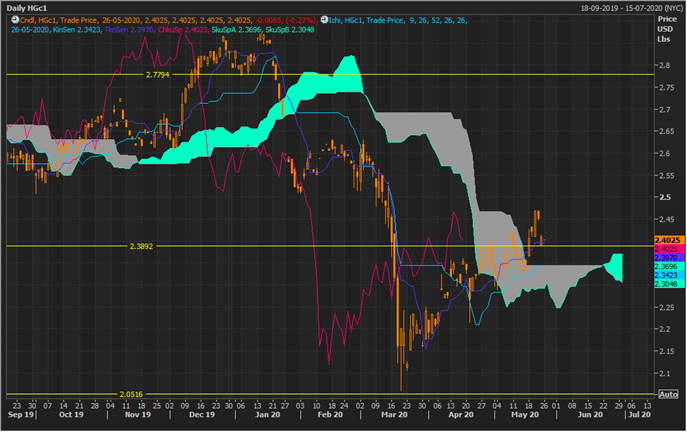 On applying the Ichimoku and further analysing the daily chart, it could be seen that the commodity has recently breached the medium-term resistance line of USD 2.3892, which should act as the near-term support.

The spread between Span A and Span B, while Span A is above Span B, is enlarging, reflecting that market sentiments turned positive recently. 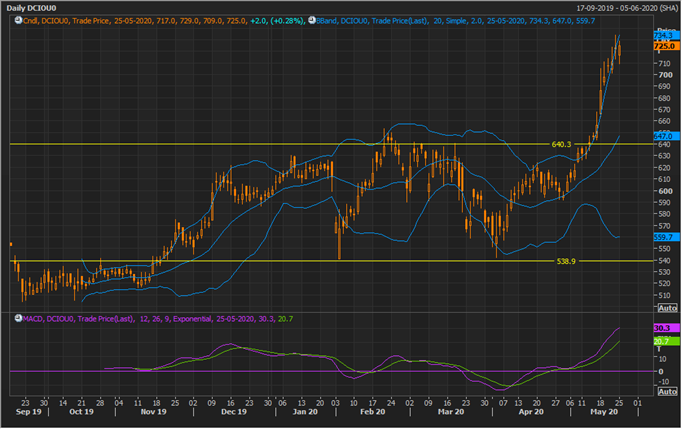 On following the daily chart, it could be seen that the commodity has recently breached the medium-term resistance level of RMB 640, which should now act as the primary support for iron ore prices. Also, the mean value of and the resistance level are now overlapping, which in turn, makes the level decisive.

Furthermore, the commodity has reached the +1 SD of the Bollinger band and has retraced during the day’s session, and as per the market volatility statistics, post deviating from the mean an asset usually retests the mean (know as mean reversion principle).

The 12,26,9 MACD is giving a positive signal while the Bollinger band has expanded, reflecting upon the strength of bulls in the status quo.

Crude oil prices have witnessed a seesaw ride with first prices spiking during the fourth quarter of the year 2019 in the wake of attacks on Aramco oil tankers and tensions across the Middle East and then falling in the wake of massive lockdown and travel restrictions imposed by many countries across the globe to contain the spread of COVID-19 outbreak.

Post the fall; the decision to deepen the production cut by OPEC and members, which also received support from the United States and slight recovery in economic figures of China supported oil prices, which recovered from the level of USD 15.98 per barrel (intraday low on 22 April 2020) to the present high of USD 36.98 (as on 21 May 2020).

However, oil rally seems to have now halted around the strong resistance zone. 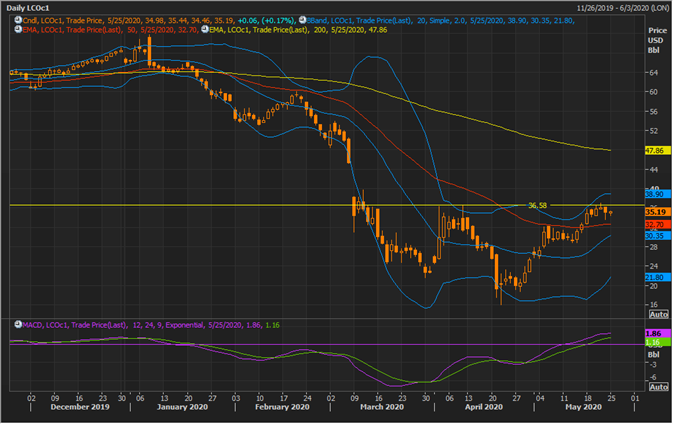 On following the daily chart, it could be seen that crude oil prices are facing resistance around the +1 SD of the 20-day simple Bollinger band, which is slightly above the medium-term resistance line of USD 36.58. Currently, the commodity is trading above its 50-day exponential moving average with a positive signal from the 12,26,9 MACD indicator, reflecting on the improved sentiments in the market.

However, the crude oil has taken a strong resistance around the level of USD 36.58 – 38.00, and this is also the zone of gap down opening that was witnessed in March 2020. Investors should monitor this level as a break and price action above the same could further seed bullish sentiments, and failure to do so could again attract bears