Base metals are back in action with copper and nickel prices climbing swiftly and supporting ASX-listed metals and mining stocks.

While gold and iron ore along with some other precious commodities such as palladium remained top- performing commodities of the year so far, base metals prices have started moving up the ladder, leading to a sentiment splash in ASX-listed base metals stocks such as Independence Group NL (ASX:IGO).

To Know More, Do Read: Commodity Stocks Making Their Way To The Top

The surge in base metals prices has prompted many ASX-listed mining companies to rethink on their halted projects. For example, recently, Metals X Limited (ASX:MLX) completed the identification of a large open-pit at its previously suspend Nifty Copper operations and improved the scoping measures of the prospect, while IGO was recently wafting steam in its exploration program at the Fraser Range prospect and more recently kick started the ground activities in West Kimberley Joint Venture

The Company announced a preliminary metal production report for the June 2020 quarter.

Nova operations demonstrated a strong year of performance with all major metals production including nickel, copper, and cobalt, surpassing the upper range of the FY20 production guidance.

Furthermore, the Tropicana prospect (30 per cent stake) of the Company also witnessed a year of strong performance with the gold production from the prospect meeting the guidance range. 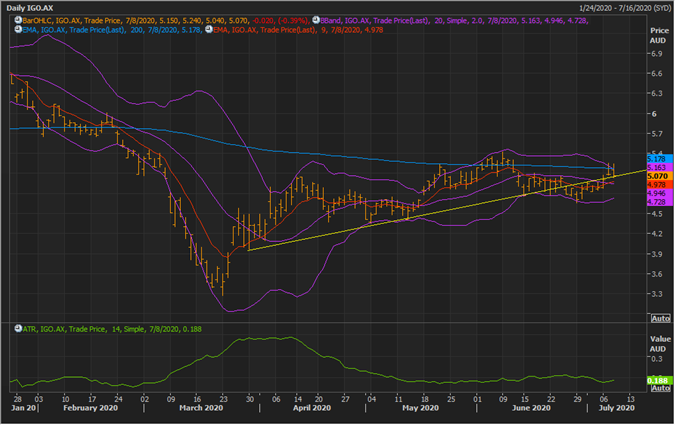 On following the daily chart, it could be seen that post breaking below its short-term trendline, the stock took the support around the minus 2 standard deviation of the 20-day simple Bollinger band and surged to breach the resistance trendline, which should now act as immediate support for prices. 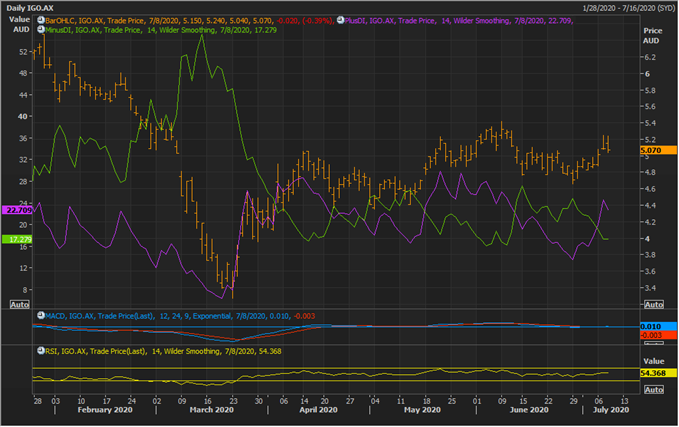 On further applying plus and minus Directional Index on the daily chart, it could be seen that the plus DI has crossed the minus DI from below, which coupled with a slight positive indication from  12,24,9 MACD indicator is reflecting that bullish sentiments are currently taking roots.

Additionally, the 14-day Average True Range is now sloping upwards, which coupled with an above mean RSI suggests that the price action might be able to seed bullish sentiments over a short-run.