The dynamics in the steel market are being impacted by the US-China trade war. As per Australian coal company, Whitehaven Coal Limited (ASX: WHC), the thermal coal prices have continued to exhibit weakness due to the impact of ongoing market conditions which include: 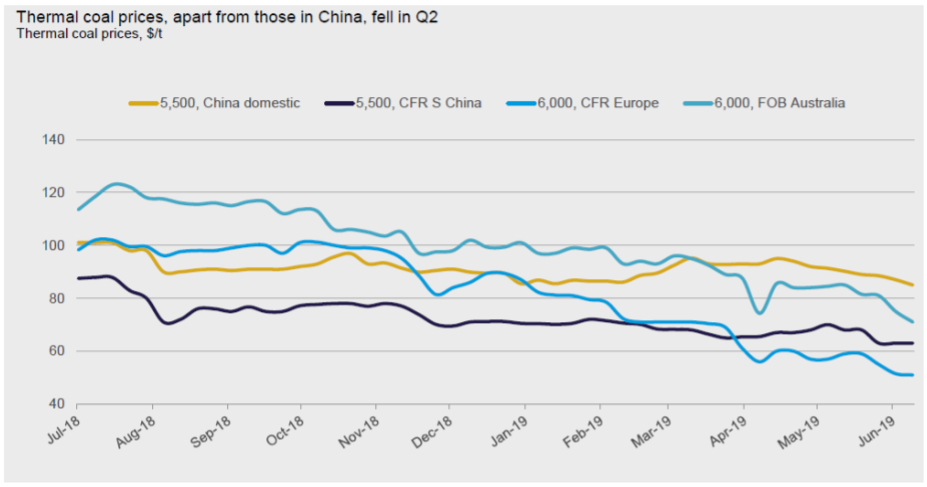 Further, the lower Seaborne demand in 2019 is forcing cuts in supply. Although thermal coal imports to Vietnam and Pakistan have been growing strongly, the USA, Columbia and South Africa have suffered cuts to thermal coal exports. At the same time, Russia and Australia are increasing exports of higher energy coal whilst Indonesia continues to increase the supply of lower energy product.

Weaker demand and previously resilient supply of steel products into the export markets from the key NE Asian producers has resulted in widespread production cuts, causing softening in raw material demand, even for hard coking coal.

Due to the ongoing trade war, China’s industrial sector witnessed lower growth in the September quarter, as reported by NAB’s Research division. During the quarter, China’s economy grew by 6.0% yoy. This is the weakest rate of growth since the year 1990. As per NAB’s Research Division, despite the overall decline in China’s import volumes, a number of major commodities recorded strong increases in volumes in September. The imports of both coal and crude oil grew strongly – up by 20.3% yoy and 10.8% yoy respectively, while iron ore imports also rose – up by 6.3% yoy to 99.4 million tonnes.

The below-mentioned two ASX-listed coal stocks ended today’s trade in the green zone. Let’s take a closer look at these Coal players and their recent updates.

An emerging force in the Australian Coal mining industry, Whitehaven Coal Limited (ASX: WHC) produces coal to service its premium markets of Japan, Korea and Taiwan. The company is now looking forward to taking advantage of the substantial growth in coal-fired power generation in Southeast Asia.

In the month of August 2019, the company struck a deal to acquire EDF Trading Australia Pty Limited, (owner of 7.5 percent interest in the Whitehaven-operated Narrabri Mine). Following the completion of the acquisition, which will take place between November 2019 and February 2020, Whitehaven will own 77.5% of the mine and will account for the underlying interest in the additional 7.5% at that time.

During the year, the company produced 10.9 million tonnes of saleable coal in 2019 which is a 21% increase on last financial year and the highest in the company’s history.

In the second half of 2019, the company was majorly focused on the integration of Bengalla into the New Hope business to improve efficiency and lower unit costs across the business.

During the year, New Hope entered into an amortising secured loan facility for $600 million with a syndicate of Australian and international banks. As at 31 July 2019, the company had net debt of $301.2 million.