A Flick Through Perpetual Resources’ Operational Activities During 1H FY20

During the period, the Company continued to focus on the exploration of silica sands at its areas of interest located in Western Australia, including Sargon, Eneabba, Beharra and Eneabba North.

Let’s take a quick peek into the key developments reported by the Company during the half-year:

During the half-year period, Perpetual progressed with exploration activities at the Beharra Silica Sands Project, which is the Company’s flagship asset located 300km north of Perth and 96km south of the port town of Geraldton in Western Australia.

With the test work, the Company intends to determine the amenability of a combination of gravitational and conventional screening methods to generate a beneficiated product. Moreover, the testwork is expected to offer guidance towards the end user applications and final product specifications.

In addition to the appointment of Nagrom, the Company reported the following developments at Beharra during the period:

It is worth noting that the Company did not conduct any field exploration activities at Beharra during the period; however, the desk top reviews of all information about exploration programs future possible activities in 2020 were undertaken.

Continuing exploration activities at Beharra, the Company reported the following results subsequent to the half-year:

The Company is progressing with further beneficiation test work at the project. 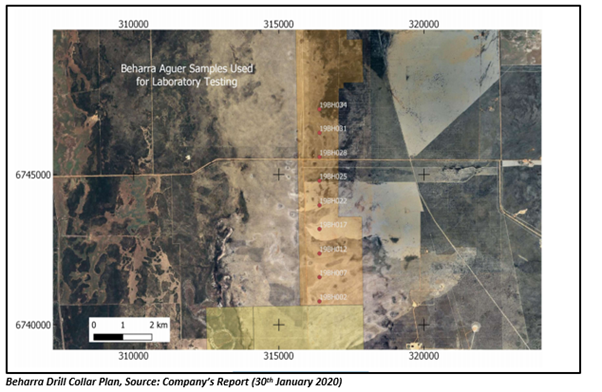 During the period, the Company was granted Exploration Licences for:

In July 2019, the Company entered into an exclusive Option agreement to acquire a 100 per cent beneficial and legal interest in two silica sands projects, Eneabba and Sargon projects.

Subsequently, the Company acquired the Eneabba North Project in September last year. An initial auger drilling campaign has been completed at the project and results are presently pending. Moreover, the project appears prospective for hosting both yellow and white sands from observation of the auger drilling.

Signed a Contractor Agreement with Qube

The Company entered into a Contractor Agreement with Qube Bulk Pty Ltd (ASX:QUB) in December 2019 to assess options and carry out the logistic services for a project to end user transport and materials handling solution.

With ~$200k utilised in the operational activities, cash and cash equivalents stood at ~$367k as at December 2019 end.

In a nutshell, the Company progressed substantially with exploration activities at its flagship Beharra project during the period, and is well-on track to produce high-grade silica for the international and domestic markets backed by attractive project portfolio.