The best way for a healthy and nutritious diet to an infant is breastfeeding. However, for overall development of babies who are not breastfed, a safe and nutritious alternative is suggested for the infants and toddlers- Infant Milk Formula. Infant formula comprises of various nutrients such as vitamins, minerals, fats, carbohydrates, proteins, trace elements and others.

According to Australian and New Zealand guidelines for infant feeding, it is recommended to feed commercial infant formulas as an alternative to breast milk till 12 months (if an infant is not breastfed).

In the Australia New Zealand Food Standards Code, infant formula products are regulated under Standard 2.9.1 which stands for Infant Formula Products. There are three types of infant products covered by this standard-

In this article, we are highlighting what is recent for Infant Milk Formula Stocks- BAL, A2M, WHA, NUC. 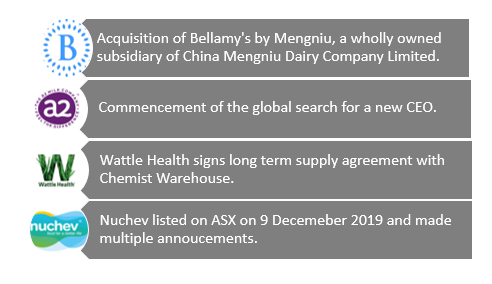 An Australian F&B company, Bellamy’s Australia Limited (ASX: BAL) is the country’s largest organic infant formula maker. The company provides nearly 40 products according to the need of infants or toddlers.

According to an ASX announcement on 10 December 2019, the company unveiled that the Supreme Court of New South Wales has approved the proposed acquisition of Bellamy's by Mengniu, a wholly owned subsidiary of China Mengniu Dairy Company Limited.

An infant formula company, The a2 Milk Company Limited (ASX: A2M) is into the commercialisation of A1 protein free milk under the name of a2 and a2 MILK brand. The company was founded in New Zealand in 2000 by scientist Dr Corrie McLaughlan and currently operates in the US, Australia, New Zealand, China, Singapore and Hong Kong.

On 9 December 2019, the a2 milk board announced that Jayne Hrdlicka, MD & CEO of the company will step down from her role. The Board mentioned that the global search of the new CEO will begin, and, in the meantime, the former CEO of the company Geoffrey Babidge would work as an Interim CEO.

On this announcement, the a2 Milk’s Chairman commented-

The Supply agreement with Chemist Warehouse-

On 6 December 2019, the company announced that it had signed a long-term (10 years) agreement with Chemist Warehouse (CW) for its full certified organic nutritional dairy range, which also includes a premium range of Uganic infant formula and the Little Innoscents organic skin care range.

As a part of the supply agreement with Chemist Warehouse, Wattle Health would issue the following equity on specific milestones-

For the five years of this agreement, Wattle Health would spend approximately $1.2 million on an annual basis for the marketing and support to build brand loyalty, awareness and sales.

An Australian based company Nuchev Limited (ASX: NUC) is working with the aim of improving human health and well-being. The company was established in 2013, and it is into the production, marketing and selling of various goat formula products into the Asian and Australian markets. With a highly skilled and experienced management team lead by its CEO Ben Dingle, NUC operates in a unique position within the dairy nutrition market and is planning to expand into the other health and nutrition-related products. Nuchev was listed on ASX on 9 December 2019.

On 9 December 2019, Nuchev Limited updated its financial report for the year ended 30 June 2019. The key financial highlights of the company are-